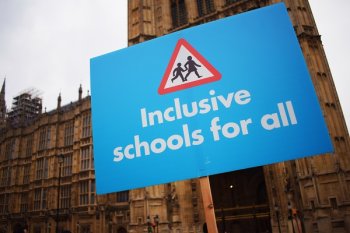 Our education and schools officer examines the education proposals in the Government's new integration strategy, arguing they should lead to a wider discussion of children's rights and facing up to the religious segregation rife in education.

When we talk about 'integration' we are really talking about the ability to participate in a free and equal society. This ability is underpinned by rights, but without the positive value of participation, these rights are simply theoretical, stale and hollow.

It cannot be said often enough: an inclusive education system today is our best chance of an inclusive society tomorrow. It is hard to think of another area of public life that has education's potential to break down segregation and sectarianism. Yet there is no other area of public life where religious segregation and sectarianism is not only tolerated, but actively facilitated by government policy.

We have to treat the new Integrated Communities green paper as well intentioned, and look forward to contributing to the consultation on the proposals, but we must demand more. The green paper draws on the Institute of Community Cohesion's research on ethnic segregation in schools, but neatly ignores that report's examination of the role of faith schools and faith based admissions in driving this (along with socio-economic) segregation.

On the one hand the government acknowledges that "segregated schools reduce opportunities for children and young people to mix with others from different backgrounds in their formative years and it can restrict pupils' outlook and education"; on the other it continues to facilitate this segregation. Like the proposal that new faith schools show how they "seek to attract pupils from a range of different backgrounds", in order that they can then exclude these pupils, the government is tying itself in a knot of inconsistency and hypocrisy.

The government could avoid all these mental gymnastics by simply living up to its rhetoric. You want "all state-funded schools to be inclusive and welcoming of pupils of different backgrounds"? Great. At a minimum this should mean an end to religious discrimination in admissions. If followed through, it must lead to questioning whether any school organised around an exclusive religious identity can ever be truly inclusive.

The paper seems to acknowledge that previous multicultural and multifaithist approaches have meant "some voices are too seldom heard". Perhaps they should stop listening so much to the faith school advocates and 'faith leaders', and more to the people of all faiths and none opposed to faith-based selection.

The paper makes no reference to the integrated areas of PSHE and citizenship education, despite their powerful potential to break down barriers to inclusion and promote integration. – particularly when underpinned by a human rights framework.

A number of other education issues raised by the NSS have been addressed in this paper, and we look forward to commenting on them in more detail. On home education, the government will continue to respect those parents who do opt to home educate. But it acknowledges that this "must be balanced with the child's right to a good and suitable education in a safe environment which equips them for life in Britain". We need more detail on how the government will support Ofsted and local authorities to safeguard children where they are "in reality attending unregistered settings". We hope this sparks a wider conversation about the balance of children's rights in education.

Too often a lack of oversight of 'home schooling' leaves children vulnerable to extremism and local authorities powerless to protect their interests.

We welcome the commitment for schools to "ensure they act within their duties under equalities and human rights". This needs to include supporting schools when the right to manifest religion must be reasonably restricted in order to "balance of the rights of individual pupils against the best interests of the school community as a whole".

In such cases the paper says that it "is for the school to make the final decision and we will not tolerate undue pressure or harassment of school leaders". But without guidance and support schools can be left isolated and vulnerable to religious bullying.

The government should support schools to share best practice on implementing their public sector equality duty. But they must also go further, by making the Equality Act apply in full in all schools and taking action against schools that through censorship, erasure and non-compliance seek to limit their pupils' knowledge of other backgrounds.

Commenting on the education proposals, schools minister Lord Agnew said: "Schools are at the heart of our communities, bringing families from all walks of life together. Through education, we can ensure the next generation learns the values that underpin our society – fairness, tolerance and respect." Let's hope one day all our schools live up to this ideal.