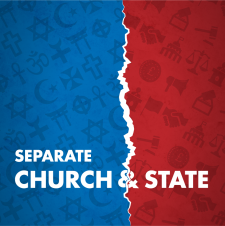 We campaign for the separation of religion and state. This includes disestablishing the Church of England, removing the Bishops' Bench, and ending prayers as a formal part of government business.

In a secular democracy all citizens are equal before the law and parliament. No religious or political affiliation gives advantages or disadvantages and religious believers are citizens with the same rights and obligations as anyone else. In the 21st century no religion should be granted a privileged position.

Secularism is crucial to successful democratic governance across the world: this is just as true in the UK as it is in the Middle East. We campaign for a secular democracy with a separation of religion and state, where everyone's human rights are respected equally.

A secular state would protect the rights of everyone. Those arguing for continued establishment and religious privilege are increasingly out of touch, but they have vast resources. Please consider a donation to enable us campaign for the separation of religion and government. Together we can make a difference.