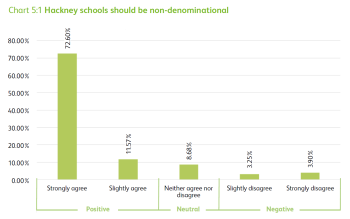 A consultation on educational proposals by the London borough of Hackney has revealed extensive support for inclusive secular education, with just 6% of residents supporting denominational schooling.

The consultation by Hackney Council, which ran from 28 November 2016 to 21 July 2017 and received over 2,500 responses, asked respondents if they agreed or disagreed with a number of policy proposals for schools in the borough. Eighty-three per cent of respondents agreed that "Hackney schools should be non-denominational".

Respondents felt that Hackney schools had "comparatively low segregation between pupils from different backgrounds" and this should "be safeguarded by the local authority". The consultation comes after 15 years of school reform in the borough and echoes responses from a 2003 a survey of residents at the beginning of the process which showed "clear demand for non-selective, non-denominational, mixed-sex comprehensive schools".

The religion and belief makeup of the respondents was broadly in line with British averages (as judged by the British Social Attitudes Survey), and the report showed no correlation between respondents' religious beliefs and support for non-denominational schooling.

The National Secular Society's faith schools campaigner, Alastair Lichten, said: "Efforts to paint opposition to faith based schools as an 'atheist issue' or anti-theist cause just don't fly. While the non-religious majority do face particular discrimination by faith schools, support for non-denominational inclusive schools is broad across all religion and belief groups. Whatever their religious backgrounds the vast majority of people are more concerned by educational standards than religious inculcation when choosing their child's school."

Members of the borough's Charedi Jewish community had called for a boycott of the consultation, claiming that asking for views on illegal schools and non-denominational schooling was 'anti-religious'. A consultation event with members of the Charedi community revealed suspicion of the Council's efforts to tackle illegal unregistered schooling.

Respondents claimed that the borough's general school provision was not "of interest to their community" and that they should be "engaged in a bespoke way" – something the NSS described as "the very definition of insular".

Elsewhere in the consultation, 65% of residents say they were concerned with unregistered (illegal) schools. Seventy-seven per cent supported compulsory registration of home school pupils to stop them disappearing from the education system.

One resident told the consultation: "I am concerned about the number of unregistered faith schools in the borough which do not appear to be regulated by local or national bodies; do not provide a broad curriculum and whose buildings are not safe or fit for purpose."

Mr Lichten added: "It's disappointing to see a religious community again painting efforts to protect children's educational rights as an attack on them. Overall the consultation is positive news. Hackney like many areas of the country needs to increase its school provision. Given the country's changing religious demographics and opposition to religiously segregated schools, these new schools should not be based around religious identity, but should be welcoming to all.

"We will be working with supporters across the UK to help them pressure their local authorities to safeguard and expand inclusive secular school provision."