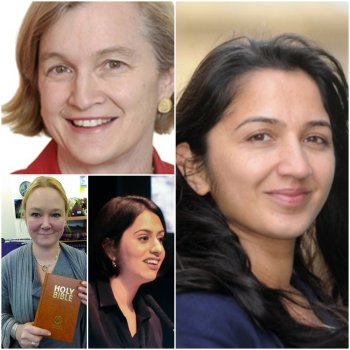 On International Women's Day, Megan Manson celebrates the stories of seven brave and determined women in the UK who religious hardliners have tried – and failed miserably – to bully over the past year.

Religion is one of the key obstructions to equality for women throughout the world. Where religious sensibilities are prioritised above women's rights as human beings, women find themselves deprived of opportunities, education, legal protection, freedom of expression and even basic bodily autonomy. While the UK may have far greater gender equality than many other countries, it's still the case that women may find themselves victimised and abused by religious conservatives.

But there are plenty of women who have refused to let the bullies get away with it. In standing up for themselves, they have also paved the way for greater freedom and fairness for everyone, regardless of gender. This International Women's Day, let's take a look at just a few of the many women in the UK who have challenged religious groups over the past year and come out on top.

Sara Khan
CEO of anti-extremism and women's rights organisation Inspire, Sara Khan has a long and impressive track record of working independently and with the government to tackle radicalisation and Islamism. This led to her appointment as lead commissioner for the Home Office's commission for countering extremism. Her appointment led to an outcry from Islamic organisations such as the Muslim Council of Britain, 5PillarsUK, MEND and the Muslim Public Affairs Committee, who decried Khan's support of the Prevent programme and her lack of "grassroots credibility within the Muslim community". They even called for Khan's resignation.

Khan has no plans to quit her post, and in February she left a farewell message on the Inspire website in preparation for leaving for her new role.

Bishop Anne Dyer
When Anne Dyer was appointed as Scotland's first female bishop in November, seven of the 14 Aberdeen and Orkney diocese priests signed an open letter protesting the move and calling for her to withdraw her acceptance of the post. The letter described her appointment as "divisive and disrespectful". In response to the letter, Bishop Mark Strange wrote: "You state in your letter… that your 'protest' is not personally directed at Canon Dyer, and also that it does not concern arguments about women bishops or same-sex marriage. We are glad to note that and simply observe that to invite her to withdraw her acceptance of election seems entirely inconsistent with those assertions."

Ignoring the calls to step down, she made history by becoming the Rt Rev Anne Dyer after a consecration service at St Andrew's Cathedral in Aberdeen last week.

Amanda Spielman
Head of Ofsted Amanda Spielman continually works to prevent egregious religious demands getting in the way of the education and welfare of school children. In July she committed to tackling illegal faith schools, following the identification of around 300 unregistered establishments. In the same month she criticised government proposals to scrap the 50% religion-based admissions cap at faith schools.

Her condemnation of separating boys and girls in mixed-sex faith schools, supported by a legal intervention from Inspire and Southall Black Sisters, led to a ruling that the segregation amounted to unlawful sex discrimination in October. In November, she responded to concerns regarding schoolgirls being forced to wear the hijab and encouraged families to complain if they had worries about fundamentalism and gender inequality at schools. And in February she backed St Stephen's primary school in Newham for restricting hijabs and ritual fasting for young children.

For taking on religious extremism in schools, Spielman has received threatening emails  and anti-semitic abuse, apparently from a "mixture of Islamic extremists and the hard left".

But she refuses to be silenced by the bullies, and has pressed on with intervening in schools where religion threatens the education and wellbeing of children. She has just been granted a further £1m to help Ofsted tackle unregistered schools. "If we let ourselves be intimidated out of discussing these issues, it's children who will suffer," she says.

Leona Rawlinson
On the Isle of Lewis, the influence of fundamentalist Protestantism means businesses and public services are frequently compelled to close on Sundays. There are even signs in public parks telling people not to use them on Sundays.

But Rawlinson refused to change her shop hours. As a result of the press coverage of these incidents, she now has the "best known little shop on the island".

Zelda de Groen
Back in 2016, 23-year-old Zelda de Groen was sacked from the ultra-orthodox Jewish Gan Menachem nursery for living with a man outside of wedlock. The school told her she should be married by her age and her lifestyle contravened the school's religious ethos.

De Groen responded by suing the school for direct and indirect religious discrimination, direct sex discrimination and harassment. The tribunal described the school's treatment of de Groen as "humiliating, degrading and offensive". De Groen won her case in December 2017. Her success has set a precedent for other faith schools, and according to one specialist in employment law, "will serve as a warning to others, and reinforce the message of the Equality Act".

Amina Lone
Co-founder of the Social Action & Research Foundation, which strives for a more equitable society, former Labour parliamentary candidate Amina Lone has long spoken out against misogyny and extremism in Muslim communities. After supporting MP Sarah Champion, who was forced to resign from the shadow cabinet for publicly raising the issue of British-Pakistani men sexually exploiting white girls, Lone also found herself deselected in August.

Lone believes it has become harder for South Asian Muslim women to enter and stay in British local politics. For speaking out, she says she has been "vilified and ostracised, and been labelled a bad Muslim, not good enough Muslim, a sellout, a gori [a white person] – the usual stuff they throw at women, and much worse than that."

Despite the bullying she has endured, Lone has not stopped campaigning passionately for equality and reform in the British Muslim community, using every opportunity to tackle both the Islamist and anti-Muslim far right and their apologists in the public sphere. This is why she has been nominated for the NSS's 2018 Secularist of the Year Award.

"J"
"J" is a transgender woman and a former member of a Charedi Jewish community. She left the community in order to live as a woman, believing her life would be in danger if she remained.

At the beginning of 2017, the Family Court of Manchester denied an application from J for direct contact with her five children. J stated that she wanted to be "sensitively reintroduced to the children" and sought "regular and significant contact". She argued that "the opposition of the community should be confronted and faced down," an argument that the judge rejected. The judge had ruled that the likelihood of marginalisation or exclusion by the ultra-Orthodox community was "so great" that it "must prevail over the many advantages of contact".

Since leaving the community J had been subjected to threats, and her offer to pay child maintenance was met with no response. But she did not back down, taking her case to the Family Division of the Court of Appeal. In a victory for children's rights over religious sensibility, the court overturned the earlier decision, allowing her to appeal. It found that the judge in the initial case "gave up too easily" and had not sufficiently considered ways for the father to have contact with her children.

A spokesperson for J's legal team told the Guardian: "This decision is one that will be welcomed not just by lesbian, gay, bisexual, and transgender individuals living within small religious groups, but by the LGBT community in general. It sends a clear message that no religious community can operate on their own island but must conform to the law of the land."