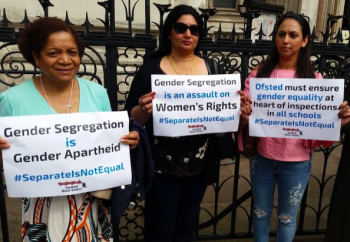 The National Secular Society has welcomed a landmark ruling in the Court of Appeal that an Islamic school's policy of segregating boys from girls amounted to unlawful sex discrimination.

Al-Hijrah School, a state-funded Islamic school in Birmingham, admits pupils of both sexes. But from year five boys and girls are completely segregated for religious reasons for all lessons, break and lunchtimes, school trips and school clubs.

"The policy of segregation in this school was not benign. It was based on the notion of female inferiority. It was shocking, for example, that books in the library suggested husbands could beat and expect obedience from their wives.

"Our society is often too slow to condemn discrimination when it comes cloaked in religion, particularly Islam. But gender apartheid is an assault on women's rights and dignity. We hope this sets a precedent and others will stand up to the fundamentalist mindset, rather than tolerating harmful and regressive practices under the cloak of religious or cultural sensitivity."

Three judges overturned last year's finding by the High Court that Ofsted inspectors were wrong to penalise the school, on the basis of an "erroneous" view that segregation amounted to unlawful discrimination.

The ruling means Ofsted will be able to penalise Islamic and other faith schools if they continue to practice gender segregation in future. There are approximately 20 faith schools that teach boys and girls separately.

Speaking after the ruling, Ms Spielman said it would set a precedent for future inspections.

"I am delighted that we have won this appeal," she said. "Ofsted's job is to make sure that all schools properly prepare children for life in modern Britain. Educational institutions should never treat pupils less favourably because of their sex, or for any other reason.

"The school is teaching boys and girls entirely separately, making them walk down separate corridors, and keeping them apart at all times.

"This is discrimination and is wrong. It places these boys and girls at a disadvantage for life beyond the classroom and the workplace, and fails to prepare them for life in modern Britain."

She added: "This case involves issues of real public interest, and has significant implications for gender equality, Ofsted, government, and the wider education sector. We will be considering the ruling carefully to understand how this will affect future inspections."

Last year Ofsted inspectors visited the school and raised concerns about many leadership failings, including "too heavy involvement" by governors in the day-to-day running of the school, and concerns over gender segregation. They said the school had an unchallenged culture of discrimination against girls and LGBT+ people.

The National Secular Society campaigned against this ruling, writing to Ofsted urge them to appeal. The NSS also supported interventions by two women's groups, Southall Black Sisters and Inspire, which highlighted the role that Islamist ideology was playing at the schools.

Pragna Patel of Southall Black Sisters called the ruling "a vital step forward in our effort to persuade the courts and state bodies to take account of the reality of the misogyny and gender stereotyping that is promoted in our schools and universities in the name of religious and cultural freedom."

Sara Khan of Inspire said: "I hope this serves as a reminder that equality and the rights of women and girls especially from minority communities must not be sacrificed in the name of culture or religion."

The full judgement can be read here.