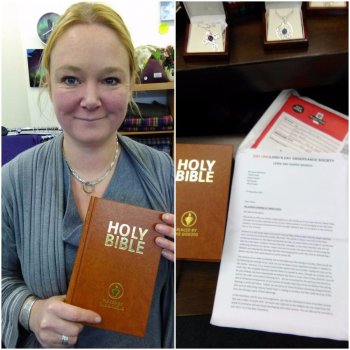 A shop owner in Stornoway has been the victim of harassment and intimidation by sabbatarians due to the owner's decision to open on Sundays.

"The purpose of our letter is certainly not to intimidate you into closing on Sunday… nor are we aware of any organized campaign in relation to this matter," Mr MacPhail wrote.

"However, it is a sincere and humble request that you consider closing the shop on the Lord's Day."

The letter continues: "We are concerned for the spiritual and eternal as well as temporal consequences of such actions of Sunday opening and do not believe that lasting blessing or profit will follow. Indeed, we are aware of many Christians expressing disappointment that such an interesting shop as Tweed Tastic is trading on Sundays and that solely because of this they are refusing to give of their patronage."

The letter goes on to quote a bible story, "the conversion of Lydia".

In August, Ms Rawlinson was approached by a man who came into the shop one Sunday to express his views on the shop's business hours and to distribute leaflets. Ms Rawlinson felt so intimidated by the incident that she reported it to the police.

In another incident, a woman entered the shop during the Sunday opening hours and "started shouting".

"It's really important to say that this does not represent the majority of Christians, just one or two extremists," said Ms Rawlinson.

Ms Rawlinson's partner Martin Flett, who also runs a business on the same premises, said, "There are obviously concerns that a section of the community will [boycott] or are boycotting the shop. The population is small enough without a section boycotting it. Tourism is a big market for the shop but we also provide a service for the local community and we have a number of craft suppliers who rely on the shop to supplement their income.

"We've also had many unsolicited messages of support and some Christians who disagree with the hardline approach have actually come into the shop to say that the hardliners don't speak for them. Some have even brought gifts by way of apology. Both Leona and I are spiritual people but we don't have the same belief systems as the hardliners up here."

Western Isles Secular Society commented: "Leona's is not the first business to be harassed in this cowardly manner and it probably won't be the last. This kind of shameful behaviour is typical of a small and hardcore group of fundamentalists."

The National Secular Society has previously supported Families into Sport for Health (FiSH), who campaigned to open a sports centre on a Sunday after it was blocked by the local council of the Western Isles from operating on the Sabbath.

Leona Rawlinson is the person in the left-hand image above.