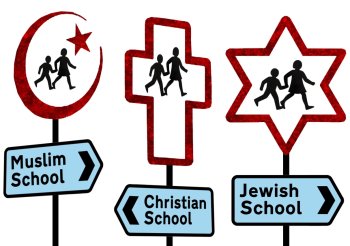 The chief inspector of schools Amanda Spielman has criticised Government proposals to allow some faith schools to select all of their pupils on the basis of faith and suggested the plans may be dropped.

The chief inspector said she wasn't sure if the Government plans were "still on the cards", leading to reports that they may be dropped.

The National Secular Society has opposed the plans from the outset. In its response to the Government consultation on the plans, the NSS urged the Government to abandon them, arguing that whilst the proposals may create extra capacity in the school system, they would do so by "sacrificing equality and social cohesion".

The Government is facing widespread opposition to the plans, which were drawn up to facilitate an expansion in religiously selective faith schools.

Last week Sir Nick Weller, head of an academy chain in West Yorkshire, said it was "unhealthy" for a city such as Bradford to have two communities living "separate lives" and for children already segregated along ethnic or religious lines to be educated at different schools.

Professor Ted Cantle CBE, founder of the Institute of Community Cohesion Foundation, has been an outspoken critic of the plans, arguing that religious selection in school admissions is "utterly deleterious for integration". Linda Woodhead, Professor of Sociology of Religion at Lancaster, has argued that the Government's changes to faith schools "side with hard-line religion whilst undermining the religious centre ground."

At present, all new academies and free schools with a religious designation can only select 50% of students on the basis of religion. 50% of admissions must be open to pupils from all faith and belief backgrounds. The cap was intended to continue to allow faith schools and "to support inclusivity and tolerance" while preventing segregation.

The Government is now under intense pressure to drop the admissions cap from the Catholic Church and some Jewish groups who are refusing to open new publicly funded schools unless they can apply 100% faith-based selection when oversubscribed.

A Government rethink could potentially jeopardise around 30-40 new Catholic schools planned by the Church, partly to cope with the influx of Catholic families from Poland and other east European countries.

Stephen Evans, National Secular Society campaigns director, said: "The more diverse we become as a country, the more integrated we need to be. Where additional capacity is needed, the Government should commit to opening inclusive secular schools that are equally welcoming to pupils of all backgrounds.

"A diverse society need not be a divided one. Any further expansion of religiously selective faith schools would be the antithesis of inclusive education and we again urge the Government to drop these divisive and dangerous plans."