NSS announces shortlist for Secularist of the Year 2018 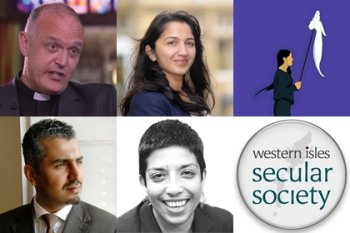 The National Secular Society has announced its six-candidate shortlist for the 2018 Secularist of the Year award.

The annual award, which comes with a £5,000 prize, recognises a campaigner or group for an outstanding contribution to the secularist movement. This will be the 13th time the prize has been awarded.

The NSS's council of management selected the shortlist from nominations which were submitted by its members and supporters. A record number of individuals and groups were nominated.

The winner of the prize will be announced at the Secularist of the Year luncheon on Saturday 24 March. Tickets for the event are still available (see below).

The six nominees are:

Phil Johnson and Rev Graham Sawyer, for their courageous campaigning work over many years to expose the institutional abuse of children and vulnerable adults in the Church of England in the face of institutional hostility. They have supported other survivors of abuse in religious settings and worked tirelessly to promote real and lasting change to protect children in the future. More broadly they have challenged religious privilege where it results in that abuse and its cover-up.

Graham told the NSS: "I am humbled to be shortlisted for this annual award. In addition, I cannot understand anyone in Great Britain today not being happy to subscribe to the NSS's motto – 'freedom of religion, freedom from religion' – whether they be a person of faith or no faith. Separation of church and state is a vital part of ensuring that this happens sooner rather than later." Phil is chair of MACSAS, which supports those who have survived clerical abuse.

Phil added: "It is a great honour to be nominated for this award. I passionately believe that no individual or institution should be advantaged or disadvantaged as a result of their faith or lack of it. Both the Anglican and Roman Catholic Churches have been a law unto themselves for many years, consistently minimising and covering-up the abuse of vulnerable people and when challenged have investigated themselves. It is time that these institutions receive external oversight to insure that they are answerable to the law and that law needs to be changed so that those responsible for covering up abuse and failing to report abuses to the statutory authorities can be held to account."

Amina Lone, for her work at the Social Action & Research Foundation (SARF), and for fearlessly challenging both the Islamist and anti-Muslim far right and their apologists in the public sphere, particularly in education.

Amina said: "I am deeply humbled to be included on this shortlist when so many more worthy people deserve recognition. In the West, we are largely protected in our secular activism by hard fought freedoms. Many do not have those luxuries across the globe. Many sacrifice their lives at the hands of those driven by hate – of different ideas; of unshackled minds; of freedom. With religious and far-right fundamentalism creeping into our public spaces, silence is not an option. Radical peaceful resistance is a responsibility we all share if we want to continue to live in our secure, largely peaceful democracy."

My Stealthy Freedom, for demonstrating the power of social movements – and individual acts of resistance however big or small – in challenging theocracy and the policing of their bodies by religious authorities. The group has encouraged Iranian women to discard their hijabs in public, in defiance of the country's Islamic authorities.

Masih Alinejad, its founder, told the New York Times this month: "We are not fighting against a piece of cloth. We are fighting for our dignity. If you can't choose what to put on your head, they won't let you be in charge of what is in your head, either."

Maajid Nawaz, for his consistent advocacy, through his radio programme and Quilliam, of secularism and human rights, for his commitment to challenging all forms of extremism and to actively engaging with people with different views and beliefs.

Maajid said: "The world is currently reeling from the scourge of Islamist theocratic extremism. In secularism lies our salvation. This should not be a controversial statement to make, but the mere existence of the secularism awards demonstrates why it is still very much needed to guard this fragile ideal, lest those filled with 'godly' hate and 'divine' intolerance destroy it."

Meena Varma, for her work as Director of Dalit Solidarity Network UK in challenging 'caste' discrimination – through research, academic work and public advocacy.

Meena said: "I am so honoured to be even nominated for Secularist of the Year 2018. The campaign to end caste discrimination is a global one and we stand side by side in solidarity with so many including the National Secular Society. Caste discrimination is a human rights issue and can only be addressed when it is seen through a lens separate to religion and when the rich and powerful are not the only ones to have the ear of governments."

WISS (Western Isles Secular Society), for standing up to the intrusion of religious control in the lives of their community, for combining secularist principles with social action, and for their commitment to including people of all faiths and none. WISS has organised to oppose Sabbatarian control of life in the Western Isles.

A spokesperson for WISS told the NSS: "It is both a surprise and a huge honour to learn that the Western Isles Secular Society was even shortlisted. We acknowledge the important role faith plays in island society, whilst recognising the increasing diversity of local culture. We continue to resist imposed religious observance, while reaching out to those of faith willing to help us build bridges and strengthen community bonds. We are immensely grateful to the National Secular Society for their support and for recognising our work."

Reviewing the shortlist, NSS president Keith Porteous Wood said: "We're delighted to present such a strong field of candidates. These nominees campaign on a wide variety of important issues, all upholding vital secularist principles. Between them they are making a vital contribution to the promotion of equality, freedom and the rule of law.

"Tickets for the event are still available and we look forward to welcoming our members and supporters on 24 March."