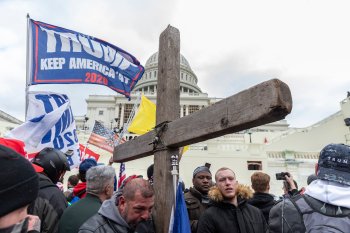 Over 1,200 books have been written about the Trump presidency, so far. It will take some time and distance to fully understand Trump's reshaping of US and global politics. But as I predicted four years ago, Christian nationalism has been at the heart of his policy agenda.

Until recently (outside secularist and nonreligious focused media) journalists have shied away from this phrase. In the US case perhaps they're wary of offending a still overwhelmingly Christian audience.

Since the insurrection at the US Capitol on 6 January there has been more widespread recognition of this trend. As The Atlantic said of the Jericho March (a set of the protests who march beseeching god to overturn the election): "Many of those who mobbed the Capitol on Wednesday claimed to be enacting God's will." The Religion News Service quoted an historian: "For decades now, evangelical devotional life, evangelical preaching and evangelical teaching has found a space to promote this kind of militancy." The New York Times noted: "This potent mix of grievance and religious fervour has turbocharged the support among a wide swath of Trump loyalists, many of whom describe themselves as participants in a kind of holy war."

There's plenty of conservative fantasy and liberal horror stories about a Christian revolution overthrowing the US government. But the events of 6 January made these feel all too real. With gallows erected and armed zip cuff carrying participants intent on taking hostages, comparisons to the President's Day Massacre – the fictional inciting incident which launches the theocratic Gilead regime in the world of the Handmaid's Tale – write themselves.

The weaponisation of 'religious freedom'

Secularists admire America's clear constitutional commitment to the separation of religion and government. But it would be hard to find another four years in US history when such jurisprudence has changed more dramatically. Decades of precedent have been overturned and a new understanding of 'religious freedom' more accommodating to Christian nationalism has replaced it. With a full third of the federal judiciary appointed to life terms by Trump, this is likely to be a particularly enduring policy legacy.

It's (not) the economy stupid

In 2016 significant parts of the commentariat insisted that beyond the blustery cultural war rhetoric Trumpism was really about economic anxiety. A similar bias motivates those who insist Islamism can only be explained in terms of reaction to economic grievances.

In Western democracies, voters sorting themselves around economic issues seems so natural that any other ideological or cultural sorting is often dismissed as an aberration or mere rhetoric. Economics play their part in Trumpism, but do not fully explain it.

In his recent discussion with me on the National Secular Society's podcast, Andrew Seidel highlighted Christian nationalism's move from the fringe to the centre of American political power. Understanding this is necessary to understand how, under Trump, US partisan identity has sorted along cultural, rather than economic lines, to an unparalleled extent.

We should be particularly wary of political sorting along religious lines, given the almost inevitable politicisation of religion it brings. Indeed, political, rather than theological or even social-economic differences are becoming the biggest denominational divides in the US. And it is cultural, not economic, forces transforming non-religious Americans into a voting bloc which may soon be as reliably Democratic voting as African Americans, and twice as numerous.

When America sneezes, the world catches a cold

It is not impossible to see such a dynamic emerging in UK politics. Our increasing polarisation between urban and suburban voters has little religious dimension, but similar divides have been exploited before. Christian nationalist movements in most of Europe may be less developed than their American counterparts. But there are deep financial and institutional links.

While parallels between US and UK politics can be overstated, our politicians have a long history of looking across the pond for inspiration. Few frontline UK politicians are seeking to be labelled 'Britain's Trump'. But there are many in Britain – and not all on the political right – who see a potential realignment of politics along 'culture war' issues as a path to political power.

It remains to be seen if Christian nationalism will remain a dominant ideology of the US political right. But it's hard to see it retreating back to the fringes overnight after four years in power. And the threat that it could become more mainstream in the UK can't be dismissed either. We need to be vigilant and willing to challenge the weaponisation of religious identity.