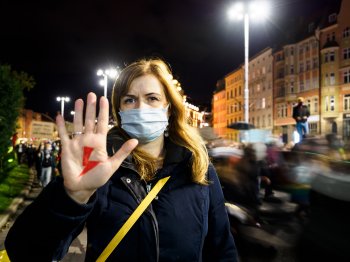 A ruling which effectively outlawed abortion in Poland has again highlighted the government's damagingly close relationship with the Catholic Church. But many Poles are now questioning the church's power, says Aleksandra Myslek.

On 22 October, in the middle of a dangerous spike in Covid-19 cases and with faith in the Polish government's competence diminishing, a ruling on the legality of what is purposefully called eugenic abortion was about to be heard. The same constitutional tribunal that was a subject of mass protests just a few years ago would announce if women have the right to terminate a pregnancy if it is known that the baby has serious defects, including those that will prevent it from surviving. The sense of tension in the country wasn't yet so palpable as few thought that the government-influenced tribunal would make a step so cruel and so dangerous as outlawing abortions in these circumstances.

The announcement brought a sense of complete disbelief. Pregnancy termination due to "serious and irreversible disability of the foetus" was ruled incompatible with the Polish constitution. The wrongdoing was obvious on so many levels. Raking over the issue during a world health crisis was thoughtless. But the added brutality of the verdict and the apparent law making by the judiciary caused a constitutional and ethical crisis.

Most commentators saw this situation as yet another government attempt to distract the public from its incompetence. If this was the case, the Law and Justice Party showed either a lack of respect for human life lost in the pandemic or very poor knowledge of the nation's views. Were those responsible blinded by the church's statistics asserting that over 90% of Poles are Catholic, which are based on the number of christenings and not actual practising members? Perhaps they weren't aware that public opinion is largely against further abortion restrictions. Did they not know that some of our neighbouring countries offered a much more liberal approach and would draw Polish women en masse, maybe even offering help in solidarity?

The answer may lie in the government's dependence on the Catholic Church.

Between 1956 and 1993 Poland had one of the most liberal abortion laws in the world, allowing terminations due to "difficult circumstances of the woman". This was an equivalent to the modern way of viewing the issue as one of health and wellbeing, as some medical professionals now propose. That paragraph was specifically removed from the legislation after intense and long lasting lobbying efforts from the clergy, who were feared by politicians for their power to influence people's political views.

This development wasn't entirely uncontested but the Polish electorate had a generally homogenous approach to Catholicism in the 90s, as it was seen as the unifying identity of the country that was still recovering from its turbulent past and the recent communist oppression. The government needed the church's steadfast support and thus sold the right of women to make choices about motherhood. Feminists never gave up the fight though and the subject kept coming back, sometimes because the left-leaning parties and NGOs asked for liberalisation of the law and sometimes because the Catholic conservatives demanded further tightening of it. Many debates and many huge protests took place but nobody dared to make changes to what was cynically called an abortion compromise.

Now, in 2020, the government seems to be reaching for the affirmation provided by the church's support one more time. It's a bow to the institution that is still thought to be able to make or break Polish politics. Perhaps the government is preparing to soften its ideological stance against LGBT people, as the EU reaches for dreaded financial threats in response. Maybe, the response to the pandemic is going so badly that the government expects public discontent that can only be remedied by ideological, religious consolation.

No matter the reasoning, the move was not a clever political distraction. The 2020 Poland is different from the 1993 one. Young Poles have felt that they are part of the bigger world for some time now, thanks to the high levels of literacy, technological developments, the EU, and knowledge of foreign languages. The generation that was ironically often called the John Paul II generation is not so attached to the Polish pope, who they view as a dubious historical figure. Young people are aware of their rights and already suspicious of the church due to its illogical stance on environmental issues, regressive aggression towards LGBT people, the multiple and well known paedophilia scandals and simply its pompousness, arrogance and glaring hypocrisy.

The recent ruling prompted the largest protests in Poland since the fall of communism. This seems like a breaking point; the protests unite many social groups.

This might be because the church forgot about another factor, which is perhaps specific to Poland. The country has a long history of feminism with a slightly different emphasis to its western friends. Of course, Polish women had to fight the common fight for equal rights, and the governmental response to domestic violence is still embarrassing. But somewhere along the way, Polish culture became centred around strong women.

It is a part of the patriotic duty to respect women and the country's comedic scene loves to remind everyone that women should be feared. Conservatives and liberals alike still let women first through the door and often stand up when one enters the room. Polish women belong to the most educated in the world and they have been well represented in executive, academic and political roles (even though the current ruling party is doing so badly in this respect).

The dissonance has been reflected in recent weeks. Faced with hardline Catholics questioning the Polish identity of the women's rights supporters and the fury of the Catholic Church trying to "save" the soon to die "unborn", the majority of Poles chose to stick with living women. It has helped them re-establish their cultural identity while rejecting the church's ideological inhumanity.

The road towards liberalisation of the abortion law seems longer than ever but something seems to have broken in the relations between Poland and the church. Although there is no question that many people still dogmatically believe in the absolute sacredness of life from the point of conception, many don't see the church as a fair player in the game anymore. Instead they see a cruel manipulator that will choose to inflict real suffering and take away human dignity in pursuit of ideological purity and control.

The lightning bolt in the image is the symbol of Strajk Kobiet, the women's strike movement in Poland.

Aleksandra Myslek is a member of the NSS's council of management. The views expressed in our blogs are those of the author and do not necessarily represent the views of the NSS.