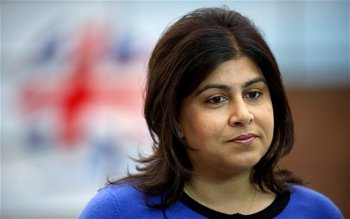 I'm sure Baroness Warsi's speech to the Pontifical Ecclesiastical Academy in Rome today will please its audience. She promised to support the Pope in his desire to return Christianity to the centre of public life in Britain.

It also seemed to chime with the mood in this country — at least the mood of the media — which was, apparently, fizzing with fury at the modest High Court judgment that ruled that it was not legal to include prayers on a council agenda – because they are not council business.

Under extreme bombardment from the press, we at the National Secular Society were preparing to barricade the doors – until we noticed a sudden and unprecedented upsurge in people joining us.

Something very strange was happening. The media was almost unanimous in its disapproval — or, in some cases, hysterical condemnation — of the ruling. Strangely, it was the Sunday Times alone that gave unequivocal support to the ruling – and in an editorial even suggested that it should be extended to cover prayers in Parliament.

Another strange phenomenon is the disparity between what newspapers are writing above the line and what their readers are writing below it. As an example, look at the reaction to Baroness Warsi's courting of the Pope in the Daily Telegraph – thousands of reader responses and a vast majority of them hostile to what she is doing.

Then this morning comes the result of an Ipsos Mori poll commissioned by the Richard Dawkins Foundation which shows that overwhelmingly, those people who ticked the 'Christian' box in the last census don't want religion to have any influence over public policy. That's 74% of self-defined Christians who do not agree with Baroness Warsi.

She may be an enthusiast for religion, but her enthusiasm is not shared by the nation. The Ipsos poll also revealed that the 72% of people who said they were Christian in the 2001 census are nothing of the kind. They ticked the box because they thought they were good people or because their parents were Christian – very few of them actually believe in the precepts of Christianity, and even fewer actively practice it.

So, who is out of step here? If you read the newspaper commentators it is most definitely the National Secular Society. But if you listen to the people, you'll find that it is the pious politicians who seem to be threatening us with theocracy.

Baroness Warsi led a delegation of senior British Government Ministers to the Vatican to have a 20 minute chat with the Pope. She wants to assure him that religion will be returned to the centre of public life, just as he called for on his recent trip to this country. She will assure him that his visit was highly successful and its success must be built on.

Unfortunately, it was not highly successful; it was not even slightly successful. A year after the visit, the Catholic Church commissioned a poll to see what lasting impact it had had on the nation. According to the research, hardly anyone remembers that it actually happened. And 91% said it made no difference to their moral outlook at all. Strangely, the Church doesn't seem anxious to draw attention to the results of this poll, which was carried out by Opinion Research Business among 2,049 adults.

Of the individual events — meeting the Queen, speaking in Parliament, meeting the Prime Minister — typically only 1% — or less — of those who had any memory of the visit recalled them. (A few were up to 5%.)

The biggest proportion of those who recalled anything about the visit (albeit only 11%) remembered our protest campaign about the enormous cost of the jamboree to the taxpayer.

And as for the impact it had – 91% of respondents said the Pope's visit made no difference whatsoever to their personal or spiritual values.

You hadn't heard of this poll? I wonder why.

Well, it might be argued, the Holy See participates — indeed in some cases, interferes — in every other Government's affairs. Only last week it succeeded in forcing President Obama to compromise his health reforms and in Britain it is gearing up to give the Cameron plan for gay marriage a real kicking.

Lady Warsi talks of "militant secularism" with some distaste. But secularism's militancy is as nothing compared with the aggressive tactics of the Catholic Church when it is not getting its way.

And besides, as the Dawkins poll illustrates quite plainly, secularisation is a process that people choose for themselves. Taken together with the Church's own plummeting attendance figures, it clearly shows that people are voting with their feet. If they do not believe the precepts of a religion, why should a Government try to force it upon them? Religion only has value if it is freely chosen. Coercion kills it stone dead.

Baroness Warsi may be a woman of principle, but she is swimming against a very strong tide that is not controlled by the National Secular Society or by the Church of England or the Holy See or anyone else. Turning away from religion is a choice that the people have made of their own volition and using their own conscience. It is not the Government's job to tell them that they are wrong.

Lady Warsi risks starting a culture war that she cannot win, and neither can the Conservative Party. If religion is given too much of a say in our day to day life, then there will be a reaction that David Cameron will not like. It will take place at the ballot box.