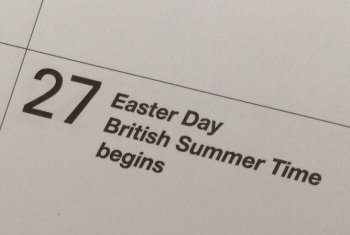 The National Secular Society has urged the Government to fix the date for the Easter public holiday without waiting for religious agreement on the issue – warning that such compromise is likely to take decades and may even be impossible.

In a letter to Business Secretary Sajid Javid, Keith Porteous Wood, executive director of the National Secular Society, said: "Schools, parents and businesses are all inconvenienced by the fluctuating date of Easter. Action can be taken by the Government to fix this.

"While it is welcome that religious leaders from different Christian denominations have attempted to find a common date, this process, if it is ever complete, could take decades.

"In the meantime the moving date causes significant disruption."

Currently the date for the Easter public holiday can vary by more than a month. The earliest Easter can be is 22 March, with the latest possible date being 25 April – though these are extremes, the regular fluctuations are significant.

This results in schools having their terms interrupted and being forced to use disruptive, irregular term-lengths, and it inconveniences businesses, particularly the leisure industry where Easter is traditionally the start of the holiday season.

The Local Government Association and the Family and Childcare Trust have both expressed support for a fixed Easter school holiday to allow parents to arrange childcare in advance.

Before the 2015 General Election the NSS asked the Prime Minister to encourage consensus between religious leaders.

Since then Pope Francis has said Christian leaders "have to come to an agreement" about changing the date. Archbishop of Canterbury Justin Welby suggested that Easter could be set for the second or third Sunday of April, but said that it would take up to a decade for the matter to be resolved – a prediction the NSS has said could be "optimistic."

Crucially, however, the Eastern Orthodox Church has indicated that it will not join discussions on finding a common date for Easter – something welcomed by Patriarch Kirill of the Russian Orthodox Church.

The schism between Christianity in the east and west on the issue is very complex and it is thought to be extremely unlikely that an agreed date could be found between western Christianity and the Orthodox churches, even if the Anglican Church and the Catholic Church could agree a date between themselves.

Given this, the Society has suggested the Government move ahead "if necessary" without a consensus which may be impossible to achieve.

"The Government should press the consenting churches to fix a date for Easter public holiday, if necessary moving ahead without a complete consensus from church leaders – given the needlessly adverse consequences of a changeable date, particularly on commerce and education.

"This process should not be delayed indefinitely in anticipation of one of the longest running disagreements in Christendom being resolved. The Eastern and Western Christian churches already celebrate Easter on different dates so having a fixed 'western' Easter wouldn't introduce any further diversity in Easter dates."

The Easter Act 1928 enables a fixed Easter on "the first Sunday after the second Saturday in April" but states that the change can only be made after approval by both Houses of Parliament and that "regard shall be had to any opinion officially expressed by any Church or other Christian body".