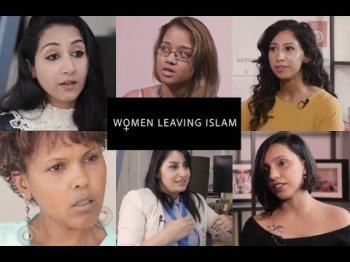 The film Women Leaving Islam shows the risks facing those who stand up for the fundamental right to leave religion and the ongoing neglect of minorities within minorities in public life, says Helen Nicholls.

In 2019 the British Social Attitudes survey revealed that more than half of the British population has no religion. Over the years many British people have chosen to leave their religion. For many, this is a gradual drift and the process is not necessarily difficult, especially if their families are not very religious. However, for others the process is not only painful, but also dangerous.

In the documentary Women Leaving Islam, six ex-Muslim women tell their stories. These are often harrowing. Halima Salat underwent female genital mutilation and was later subjected to an exorcism after trying to prevent a little girl from undergoing the same treatment. Fauzia Ilyas was prevented from seeing her daughter after her divorce. Fay Rahman describes an abusive childhood with a violent father. However, one of the most chilling parts of the programme comes right at the beginning:

"These interviews are limited to public activists as many other women originally interviewed didn't want their identities revealed or pulled out due to the personal risks involved."

This leaves us to wonder what stories the women who pulled out would have told and what might have happened to them if they had gone public.

The revelation that many interviewees were afraid to speak out publicly came as no surprise. At the NSS, we often hear from ex-Muslims, and count many amongst our membership. Some can never return to their countries of origin; others fear that they will be sent back. They are not only in danger in other countries. An ex-Muslim living in Britain once told me that he feared his family so much that if they came to his area he would move. One of our members told us that even in Britain he lives in fear, which takes the joy from his life. Another ex-Muslim living in a Muslim-majority country described the difficulties he faces every day. He did not ask us for anything but thanked me just for listening to his story.

In the documentary, Fay Rahman, who was brought up in London, describes how family members refused to intervene to prevent her father's violence. Eventually they turned on her when she called the police after he beat her badly. She left but could do nothing to help her younger siblings after the family did their best to cover up the abuse. At this point, she had not left Islam. Her offence was to involve outsiders. This echoes the pattern seen with sexual abuse within many religious organisations, where allegations have been handled internally to prevent outside interference. A public reluctance to discuss abuses within minority groups reinforces the silence.

Strict religious communities often go to great lengths to prevent members from leaving. This may take the form of educating children in illegal unregistered schools so they are unfit for life in modern Britain or keeping members in line with threats of shunning by the entire community, including family members. Ex-Muslims sometimes experience shunning.

In the documentary the YouTuber Mimzy Vidz describes family members saying they could not associate with her once she became public about her apostasy. However, what stands out in ex-Muslim narratives is the constant threat of violence. Even those with supportive families are in danger from extremists if they are public about having left Islam. Those wishing to visit family in Muslim-majority countries must also consider local laws on blasphemy and apostasy, which are punishable by death in some of them. Earlier this year, interviewee Zara Kay was arrested whilst visiting her native Tanzania on charges which appeared to be politically motivated. She has since been released and has returned to her home in Australia.

The right to freedom of religion includes the right to leave a religion. This right is not recognised in many Muslim-majority countries. However, it should be recognised in Britain both domestically and in foreign policy. The government has pledged to support Christians facing persecution abroad. It should also be willing to defend the rights of the non-religious.

There is no easy solution to the problems faced by ex-Muslims. As with other strict religious groups, the state cannot prevent religious people from shunning those who leave the faith although it can intervene when violence is threatened and, especially, when it is carried out. It can also offer some relevant services to support those affected. However, prevention is better than cure. Education on diversity must not neglect the minorities within minorities, who are often sacrificed on the altar of community relations.

The women interviewed on Women Leaving Islam were willing to risk their safety to speak up about their experiences. Politicians, journalists and human rights campaigners should be brave enough to lend their support. The risk they face is smaller: most fear allegations of racism and Islamophobia more than they fear violence. There are no easy answers, but nothing will be achieved if too many people in public life remain scared of the reasonable and necessary debate it should provoke.

There are many ex-Muslims willing to speak out. Some do so publicly, more will do so privately. We should be willing to listen to them.

Women Leaving Islam is a film by the Council of Ex-Muslims of Britain, produced by Maryam Namazie and Gita Sahgal. You can watch it now on YouTube.