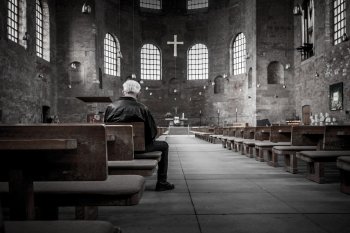 British people are getting less religious all the time. The most recent British Social Attitudes surveys indicate that over half of Brits have no religion, and this number has been steadily increasing. Other statistics relating to religion in public life also reveal that religion is becoming less important in the lives of most people in the UK – and especially the young.

It's therefore not surprising that recent figures tell us most Brits don't pray.

According to a January survey by Savanta ComRes for Premier Christian Media, 57% of Britons never pray. This includes 33% of Christians and 47% of Jews, suggesting that for a significant number of religious people, prayer does not constitute a core part of their religious identity. Additionally, 63% of Brits never attend religious services, excluding special occasions such as weddings, funerals and baptisms.

Religious worship evidently plays no role at all in the lives of a majority of Brits. So why does prayer continue to feature prominently in our public institutions?

Prayer is imposed in the very heart of our democracy: the houses of parliament. Sittings in both the House of Commons and the House of Lords begin with prayers led by Anglican clergy. While supporters insist the prayers are entirely voluntary, in reality attending prayers is the only way parliamentarians can reserve a seat in the vastly undersized chambers.

Aping the traditions of parliament, a number of local councils also begin their meetings with prayers. Every year, the NSS gets contacted by councillors who feel alienated by prayers and want them to end, but are unsure how to address the subject. When councillors raise perfectly reasonable objections to sitting through (almost exclusively) Anglican prayers to a god they don't believe in, the response can be hostile and dismissive.

If the majority of Brits don't pray, why should our representatives in local and national government be compelled to do so in order to perform their duties adequately? Why should parliament and local authorities invest so much of their valuable time in a ritual most Brits never engage in?

The area of public life where the pressure to pray is most intense is perhaps within our schools. The law requires all state-funded schools in the UK to hold daily acts of 'broadly Christian' collective worship. Children cannot withdraw themselves from these acts of worship unless they are in the sixth form. Only parents have the right to withdraw their children – and in practice it can be extremely difficult to enact this right. In the third of state-funded schools that are faith schools, or community schools that have become 'faith schools by default', prayer can be inescapable, with acts of worship taking place multiple times a day.

These aren't the only examples where prayer encroaches into our public life. Driven by the Church of England, prayer has embedded itself into national ceremonies including Remembrance Sunday and the coronation. It's slipped into school classrooms and assemblies by external evangelical groups, exacerbating the problems caused by the collective worship law. Meanwhile religious sermons are even pumped daily into the airwaves by our national broadcaster in the form of Thought for the Day.

For those who share a particular faith, praying together can be a meaningful way of fostering a sense of community and belonging. But to impose it on those who do not share the faith has the opposite effect – it is alienating, bewildering and divisive. As the figures show, those who do not pray at all, let alone those who don't take part in Christian prayers, are now in the majority.

So our parliament, councils, schools and ceremonies should change. If our institutions continue to impose prayers on the non-worshipping majority for the sake of placating privileged religious groups, we shouldn't be surprised if we see growing resentment, disillusionment, and disengagement with our democracy.