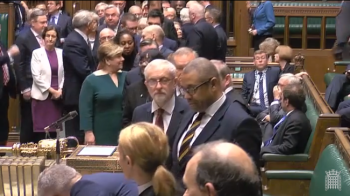 The December 2019 election returned what's hailed as 'Britain's most diverse parliament'. It has record numbers of female MPs, MPs from ethnic minority backgrounds, and MPs who are openly lesbian, gay, bisexual or pansexual.

It's also clear that our parliament is made up of people with a diverse range of religions and beliefs. We know this from the 'swearing in' ceremony of new MPs at the beginning of parliament. During this ceremony, MPs have the choice of making a religious oath to God while holding a religious text, or making a secular affirmation, that they will serve queen and country.

We have NSS founder Charles Bradlaugh to thank for obtaining the right of MPs to choose a secular affirmation, and the right of Catholics, Jews, Quakers and other non-Anglican MPs to also take their seat in parliament. Bradlaugh successfully secured the right to affirm and helped pave the way for equality and diverse representation in parliament – not simply for atheists like himself, but for people of all religions and beliefs.

Today, MPs who opt for the religious oath have a considerable variety of texts to swear upon. The menu for bibles alone is extensive: last year, MPs swore on the King James Bible, the Jerusalem Bible, the Old Testament, the New Testament, and bibles in Gaelic and Welsh. Other MPs swore on the Book of Mormon, the Bhagavad Gita, and the Qur'an.

Over 150 MPs opted for no religious text and affirmed instead. Not all those who affirmed are non-religious. Feryal Clark, the newly elected Labour MP for Enfield North, made the secular affirmation but claimed in her maiden speech to be the first MP of the Alevi religion. NSS honorary associate Ruth Cadbury, Labour MP for Brentford and Isleworth, is a Quaker who believes in church-state separation and she too affirmed. Even evangelical Christian Fiona Bruce, Conservative MP for Congleton, made the affirmation because she believes Christians are forbidden from taking religious oaths.

Parliament shouldn't be an exclusive club for one group of people. Increasing diversity in perspectives, backgrounds and ways of thinking can make its decisions more rounded and considered. It also means parliament more accurately represents the interests of a racially and religiously diverse UK.

So why is there still an insistence in maintaining something as exclusive, as divisive, and as archaic as parliamentary prayers?

Conservative MP Crispin Blunt (who also happens to be gay and Humanist) addressed this issue earlier this month. He raised as a point of order that MPs "who don't have faith or subscribe to faiths other than the established church" are required to sit through Anglican prayers simply to secure a seat in the chamber.

Blunt was also among 15 MPs who signed an early day motion calling for the abolition of parliamentary prayers last year. The MPs who signed this EDM were politically diverse, representing the Conservatives, Labour, Lib Dems, Greens and SNP, in addition to one independent MP. The principles of inclusivity, equality and modernisation are supported by members of all parties.

We will likely see diversity in parliament continue to grow. This shouldn't simply mean more religious texts get added to the pile, to be wheeled out for the swearing-in ceremony. It should mean we think seriously about fundamental changes to bring parliament into the modern era, and to more truly represent the UK for what it is today. This requires us to challenge the Church of England's privileged position in our political establishments, including its status as the established church and its bishops in the House of Lords.

Disentangling the Church of England from the state may not happen overnight. But we can begin by making some basic changes. And this should include abolishing parliamentary prayers to ensure our MPs of all religions and none feel equally welcomed and at home in Westminster.

Image: MPs take part in the swearing in ceremony in the House of Commons last month.