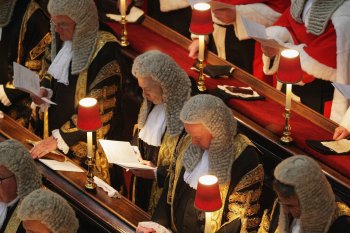 The National Secular Society has urged the lord chancellor to scrap the annual Anglican services which mark the start of the legal year, arguing that they undermine judicial neutrality.

The NSS has written to Robert Buckland to challenge the services, where judges pray for guidance while attending fully robed, in their official capacity and during working hours.

This year's main service, which is conducted according to the rites of the Church of England, takes place at Westminster Abbey today (1 October).

In the letter NSS chief executive Stephen Evans wrote that holding the services "symbolises and entrenches religious privilege and undermines the perception of impartiality of the judiciary".

He said the judiciary "must be neutral and seen to be neutral" on legal issues which religious institutions have taken an interest in, such as abortion, assisted dying and religion's role in schools.

He added that the services:

And he added that recent revelations about the Church of England's cover up of sexual abuse also showed there should be "a clear separation between the judiciary and the church".

Explaining the NSS's decision to write the letter, Mr Evans said: "In a democratic society citizens should expect to be judged fairly and equally before the law. They should also expect issues to be handled on their merits, without the privileging of religious interests.

"Marking the start of the legal year with an Anglican service is an inappropriate display of religious favouritism. It undermines judicial neutrality and serves to entrench deference to the Anglican faith and religion in public life more generally. These services should be scrapped or replaced with a secular alternative."

Earlier this year the NSS submitted a freedom of information request to the Ministry of Justice (MoJ) to ask how much the judges' services cost.

In response the MoJ told the NSS the figure was £5,827. This did not include considerable costs which the services create, such as the loss of judges' and clerks' time and the cost of extra police deployment.