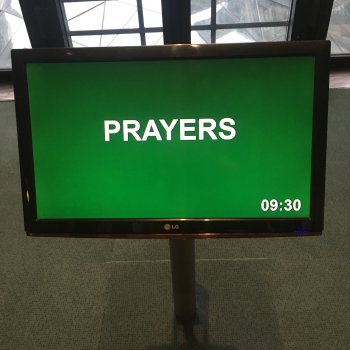 Every time our elected representatives begin the business of making laws and debating the important issues of the day, they start with prayers. The doors of the House of Commons are locked and the public are excluded while MPs stand up, perform an about-turn, face the wall behind them and pray.

In Confessions of a Recovering MP, his illuminating account of the workings of parliament, former Conservative MP Nick de Bois explains that MPs follow this bizarre ritual "without question, like lemmings throwing themselves off a cliff".

This eccentric behaviour apparently stems from the days when members of parliament attended the chamber wearing their swords. They found that they couldn't kneel down for prayers facing forwards because their swords would get stuck on the benches, or, more likely, poke the person behind them. They solved the problem by turning to face the wall and kneeling on the benches.

The practice continues to this day, but out of public view, with sittings in both houses beginning with Anglican prayers. The speaker's chaplain usually reads the prayers in the House of Commons, and in the Lords they're led by a Church of England bishop – 26 of whom are given seats in the house as of right.

Apart from serving to assert the superiority of Christianity and the Church of England in particular at Westminster, parliamentary prayers today act as a peculiar sort of seat-reservation system. Numerous MPs have told me that the only way that they can secure a seat at certain times is by attending prayers, even though they would prefer not to do so. The most charitable way this could be described is as a discourteous imposition; but to those who find prayers inappropriate or even offensive, it's a discriminatory obstacle to the performance of their duties that could easily be dispensed with.

It certainly seems reasonable to suggest that an arcane practice dating back to the Elizabethan era (prayers are believed to have started in about 1558) might be ripe for review. That's precisely what a number of MPs are proposing in an early day motion calling for an end to the prayers.

The motion, tabled by a cross-party group of parliamentarians, invites MPs to recognise that religious worship should not play a part in the formal business of parliament and calls on the Commons' procedure committee to consider alternative arrangements.

One option would be simply to abandon the practice. An overwhelming majority of legislative bodies around the world, including 24 European parliaments, manage perfectly well without any appeal for divine intervention. The three devolved parliaments in the UK have each taken different approaches but none have a specific prayer read at start of daily business.

In the Scottish parliament a multifaith 'Time for Reflection' slot takes place once a week. The Northern Ireland assembly begins its business with two minutes of silent reflection. The Welsh assembly has no such ceremonials.

If there were an overwhelming demand for the retention of some kind of ritual in Westminster, a short period of silence should suffice to allow members to pause and reflect in a way that is meaningful to them. Whatever approach is taken, religion should not be imposed or privileged.

There is no official religious breakdown of MPs. Our elected representatives' religious beliefs are nobody's business but their own. It is however clear that MPs hold a diverse range of religious and non-religious beliefs. Imposing prayer on a non-worshipping community reduces prayer to a meaningless ritual – and fails to respect the principle of freedom of and from religion.

The Palace of Westminster is steeped in tradition and partial to a bit of pomp and ceremony. But democracy is too important to allow parliament to become a fossilised relic. There is a need to modernise and make it more relevant to the citizens it serves. We're not a monotheistic Christian country. Modern Britain is a religiously diverse secular nation with fading Christian institutions. It's important that parliament reflects the country as it is today.

The National Secular Society's founder, Charles Bradlaugh MP, was instrumental in ensuring non-religious MPs could take their rightful place in parliament. The secularist MPs behind this motion are seeking to ensure that all elected representatives, and the citizens they serve, are equally welcomed and valued there, irrespective of their personal beliefs.

Members of parliament are free to pray in their own time, but institutionalised prayer doesn't belong in the legislative process. Ending the anachronistic custom would be tangible example of the reform needed in the house and would strike a blow for modernity, equality and freedom of conscience. Surely that's something all MPs can get behind.