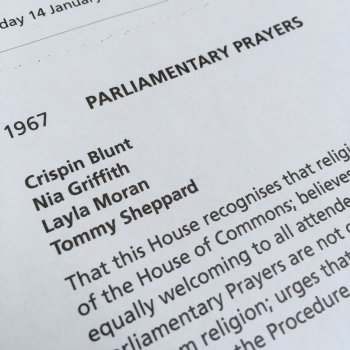 MPs have called for an end to the practice of holding prayers in parliament before the start of official business in a motion backed by the National Secular Society.

Conservative MP and NSS honorary associate Crispin Blunt has tabled a motion which says "religious worship should not play any part in the formal business of the House of Commons".

The early day motion, which has cross-party support, says parliamentary meetings "should be conducted in a manner equally welcoming to all attendees, irrespective of their personal beliefs".

It adds that parliamentary prayers are "not compatible with a society which respects the principle of freedom of and from religion".

NSS honorary associates Nia Griffith of Labour and Tommy Sheppard of the SNP, along with Layla Moran of the Liberal Democrats, signed the motion as it was submitted last week.

Early day motions are single-sentence motions which formally call for a debate on a subject at an early opportunity and which MPs are invited to sign.

Sittings in both the House of Commons and the Lords begin with Anglican prayers. In practice, prayers also act as a seat reservation system, meaning MPs and peers who wish to attend or speak in busy sessions often effectively have to attend them.

Explaining his decision to sign the motion, Tommy Sheppard told the NSS: "Parliamentary prayers is one of many archaic Westminster procedures that is long overdue a rethink. The current system completely ignores that MPs, and society as a whole, come from all faiths and none.

"We need to review how we start our day here in parliament to ensure it's inclusive and accessible for all."

Crispin Blunt said: "Whilst religious worship occupies a strong part in some people's lives, it should no longer play a role in the way we conduct our political affairs as an independent, open and diverse nation.

"In 2019 parliamentary prayers for most MPs are the price paid to reserve a favourite place on the green benches for the day. There are plenty of opportunities to pray voluntarily.

"Parliament and political thinking must be free in order to remain independent. Indeed this early day motion calls simply for a tolerant democracy that treats all belief systems alike."

The NSS has written to the Commons procedure committee to ask it to consider the issue. The society is also encouraging supporters to write to their MPs to urge them to sign the motion.

NSS chief executive Stephen Evans said: "Religious worship is for individuals who choose it – not for nations or legislative bodies.

"Members of parliament are of course free to pray in their own time, but institutionalised prayer doesn't belong in the legislative process. Parliament should reflect the country as it is today.

"Ending this anachronism would be tangible example of the reform needed in the house and represent a positive step forwards for modernity, equality and freedom of conscience."

The NSS campaigns for an end to official government prayers both in parliament and in local councils.

The motion in full reads:

"That this house recognises that religious worship should not play any part in the formal business of the House of Commons; believes that parliamentary meetings should be conducted in a manner equally welcoming to all attendees, irrespective of their personal beliefs; further believes that parliamentary prayers are not compatible with a society which respects the principle of freedom of and from religion; urges that prayers should not form part of the official business of parliament; and calls on the procedure committee to consider alternative arrangements."

UPDATE (May 2019): In a response to the NSS's letter Charles Walker, the chair of the procedure committee, said he was "content to discuss" the proposal with the committee "once we have disposed of currently pressing business".