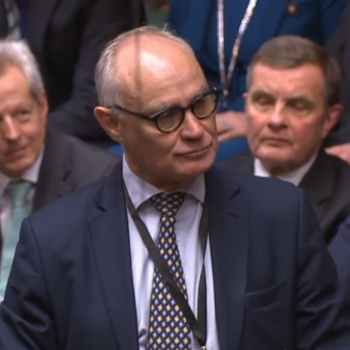 An MP has called for a review of the practice of holding parliamentary prayers after being effectively forced to attend in order to reserve a seat for prime minister's questions.

Crispin Blunt, the Conservative MP for Reigate, raised a point of order in the House of Commons on Wednesday in which he said the house's procedures committee should consider the issue.

In response the speaker of the house, Lindsay Hoyle, said Blunt was "quite right" and that the matter "needs to be taken up" with the committee.

Blunt is an honorary associate of the National Secular Society. The NSS welcomed his intervention and reiterated its call for an end to parliamentary prayers in response.

Under parliamentary rules MPs can reserve seats by placing green cards on them early in the day, to indicate that they intend to attend the prayers which are held before each sitting. An MP who reserves a seat for prayers is considered to have reserved it for the rest of the day.

MPs who are attending committees during prayer time may also reserve seats by placing pink cards on them.

Blunt was unable to obtain a pink card on Wednesday because no committees have yet formed in the new parliament. As a result he was required to attend prayers to reserve his seat.

Blunt was among 15 MPs who signed the early day motion EDM 1967, which called for the abolition of parliamentary prayers and was backed by the National Secular Society (NSS), last year.

The NSS also recently wrote to Hoyle to urge him to support a review of parliamentary prayers.

NSS chief executive Stephen Evans said: "Holding Anglican prayers as part of the official business of parliament is a divisive practice which sends an exclusionary message to those who do not wish to take part in them.

"And effectively forcing MPs such as Crispin Blunt to attend in order to do their jobs is a violation of freedom of conscience. This practice undermines efforts to ensure the UK's parliament reflects the interests of all its people, regardless of their religious beliefs or identities, and should be abolished.

"Members of parliament are free to pray at their own leisure, but institutionalised prayer doesn't belong in the legislative process."

According to the most recent British Social Attitudes survey, just 12% of Britons are affiliated to the Church of England and 52% of people say they do not belong to any religion.