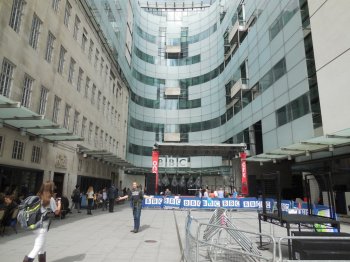 The BBC has watered down some protections for religious ideas but retained a clause placing a premium on depictions of the Islamic prophet Muhammad in new editorial guidelines.

The corporation has removed a requirement that content "likely to cause offence" to religious people should be referred to a senior editorial figure following National Secular Society lobbying.

The NSS responded to a consultation on the BBC's draft guidelines in November and raised concerns that the corporation was deferring excessively to religious sensitivities.

The final version still requires such material to "be editorially justified as judged against audience expectations and generally accepted standards", a requirement which the NSS also criticised.

The BBC has also removed a requirement to avoid "derogatory treatment" of "religions" unless it is "justified by the context". The NSS criticised the requirement on the basis that it treated religions as equivalent to people or groups of people.

But a requirement to "have strong editorial justification" for depicting Muhammad, and to refer any depictions to "a senior editorial figure", has been retained in full. The NSS argued that the requirement placed "a particular taboo" on such depictions.

In 2015 the BBC overturned an outright ban on depictions of Muhammad after the NSS challenged it in the wake of the Charlie Hebdo atrocity.

The guidelines also include a new line saying blasphemy laws around the world "can be very different" from those in the UK and content producers "may seek advice" on them from the BBC's legal team. The NSS has asked the BBC to explain its rationale for including this line and how it will be interpreted.

NSS spokesperson Chris Sloggett said the BBC had made "a couple of small steps in the right direction".

"The BBC has questioned how carefully it needs to tread around religion and made some minor alterations which will help to prevent unnecessary bureaucracy from hindering free expression.

"But its approach is still too deferential to religion in several places. It's particularly disappointing that such a premium is placed on depictions of Muhammad. The national broadcaster shouldn't be treating religion as a special case or helping to uphold blasphemy taboos.

"The new line on blasphemy laws around the world is puzzling and open to some alarming interpretations, so we've written to the BBC again to ask for clarification."

Elsewhere a requirement not to cause "unnecessary offence" to "vulnerable groups" has been replaced by a requirement to avoid causing "unjustifiable offence".

The NSS also said guidelines on impartiality and the promotion of "religious views by stealth" were inconsistent with the exclusive Thought for the Day on Radio 4 or Pause for Thought on BBC Radio 2. The BBC did not change its guidelines in response.