BBC restrictions on depicting Mohammed must be abolished, says NSS 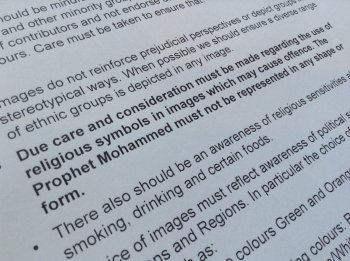 The National Secular Society is calling on the Government to compel the BBC to remove a restriction on any depiction of the prophet Mohammed.

The immediate reaction from one of those on the panel, broadcaster Julia Hartley-Brewer, was "I think that's absolutely outrageous."

But Terry Sanderson, President of the National Secular Society, said that the BBC's whole deferential approach to religion was a barrier to free debate and discussion of religion and called on the Government to compel the BBC to remove the restriction.

Mr Sanderson said: "We have been raising concerns for years about the way the BBC impedes critical discussion of religion. Too often it fawns over clerics and gives up far too many resources to a topic that does not interest the vast majority of its viewers and listeners.

"Its prohibition of the depiction of the prophet Mohammed in 'any shape or form' is just part of that culture of deference. It represents a complete capitulation to the demands of the extremists – the very people who everyone is talking about at the moment.

"How are we – the recipients of the BBCs coverage of the news – supposed to make sense of a story when a vital part of it is censored from our screens? How are we supposed to assess the cartoon unless we can see it?"

Mr Sanderson said that the BBC was an important national institution which had become an essential pillar of our democracy, in that it brought us what we thought was impartial news.

"But when the Corporation allows itself to be controlled by sectional interests and its output can be dictated by theocrats, then all this highfalutin talk of free speech from the government means nothing."

Mr Sanderson called on the Government to stand by its supposed commitment to free expression and tell the BBC to throw out this editorial restriction.

Last year, the NSS criticised Channel 4 News after it censored Mohammed from a Jesus & Mo cartoon, which was shown as part of an item on the controversy which followed after Liberal Democrat candidate Maajid Nawaz tweeted the image, saying he wasn't offended by it.

UPDATE: The BBC has removed the guidelines prohibiting depictions of Mohammed from its website. We hope a revision will be forthcoming.

UPDATE 2: The BBC have confirmed that the guidelines have been withdrawn. In a statement the BBC Press Office said:

"This guidance is old, out of date and does not reflect the BBC's long-standing position that the programme makers have freedom to exercise their editorial judgement with the Editorial Policy team available to provide advice around sensitive issues on a case-by-case basis. The guidance is currently being revised."