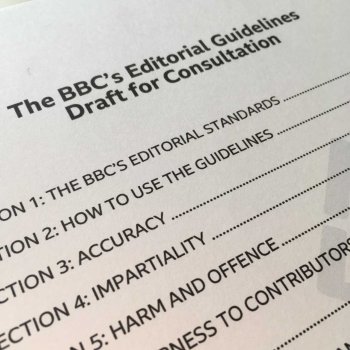 The National Secular Society has urged the BBC to treat free expression "as a positive value" as it raised concerns that new guidelines defer excessively to religious sensitivities.

In response to a consultation on the draft guidelines the NSS warned that the corporation risked curtailing free speech by placing an excessive focus on avoiding offence when handling religion.

The NSS said the BBC should "defend and uphold the principle of free expression". The society warned that the BBC's current position risked exacerbating "a climate of self-censorship" and acquiescing to "de facto blasphemy codes".

The NSS said in places the guidelines gave religions protections which were otherwise only afforded to people. The society also questioned a section which appeared to place a particular premium on depictions of the Islamic prophet Muhammad.

Much of the NSS's criticism focused on the excessive deference given to religious sensitivities. In a statement of the BBC's values, the guidance says: "In exercising freedom of expression, we must offer appropriate protection to vulnerable groups and avoid causing unnecessary offence."

The guidance also says the BBC should "take care to avoid unjustified offence" because "religious beliefs are central to many people's lives and arouse strong views and emotions". It says this despite suggesting "there is no longer an offence of blasphemy or blasphemous libel in any part of the UK".

The NSS said these lines risked "acquiescing to de facto blasphemy codes" and placed "an unjustified focus on the feelings of the religious".

The society suggested a replacement section which would say the BBC "should take care not to create a de facto blasphemy law". It also pointed out that the BBC's statement on blasphemy is factually incorrect, as Scotland and Northern Ireland both have blasphemy laws.

Elsewhere the NSS said the guidelines risked creating "a double standard concerning treatment of religion", with critics of religion facing additional and unjustified burdens and restrictions.

The BBC's guidance says content dealing with religion which is "likely to cause offence to those with religious views and beliefs" must be referred to "a senior editorial figure".

It also says producers of religious programmes and related content "must ensure religious views and beliefs… are not subject to abusive treatment", adding "contributors should not be allowed to denigrate the beliefs of others".

The NSS said "robust debate and exchanges of views should not be beyond the bounds of what is reasonable, provided such exchanges are measured and not abusive or insulting".

The NSS welcomed the fact that the guidance no longer contains a specific prohibition on depictions of the Islamic prophet Muhammad but questioned the inclusion of a section dedicated specifically to that subject.

The guidance says the BBC "must have strong editorial justification for publishing any depiction of the Prophet Muhammad". It adds that any proposal to do so "must be referred to a senior editorial figure, who should normally consult Editorial Policy". It says "many Muslims" regard "any depiction" of Muhammad as "highly offensive".

The NSS described this as "an improvement" on previous guidance which forbade any depiction of Muhammad. But it added that the section suggested "a particular taboo" which added to "a climate of censorship brought on by the unreasonable and reactionary views of some religious extremists".

It added that the guidance ran the risk of "exceptionalising and infantilising Muslims". It questioned why this section of the guidance focused only on offence, rather than "the importance of showing solidarity with those who have been murdered or attacked" for depicting Muhammad.

"If we are to uphold freedom of expression in the face of religious extremism, it could be argued that depictions of Muhammad should be become normalised."

The BBC removed its outright ban on depictions of Muhammad after the NSS raised the subject in the wake of the Charlie Hebdo atrocity in 2015.

In several places the guidelines say content dealing with religion should fall within "generally accepted standards". The NSS asked why only content dealing with religion was given this caveat, what these standards would be and who would define them. The society expressed concern that these standards would be set by "offence takers with the loudest voices".

Elsewhere the BBC says it "must ensure that material which contains abusive or derogatory treatment of individuals, groups, religions or communities, is not included in our output unless it is justified by the context". The NSS said the inclusion of "religions" in this list "appears to suggest ideas are being afforded protection which is otherwise only afforded to people".

The NSS welcomed a stated commitment to inclusivity but criticised the ongoing exclusion of non-religious contributions to Thought for the Day on Radio 4 and Pause for Thought on Radio 2. The society also highlighted its research from earlier this year which shows Thought for the Day is increasingly viewed as out of touch.

Explaining the NSS's contribution, chief executive Stephen Evans said: "In these draft guidelines the BBC places too much emphasis on avoiding offence and not enough emphasis on protecting free speech.

"It's reasonable for the BBC to expect its output to be contextually justified. And many of the points in these guidelines may appear reasonable in isolation. But this guidance consistently errs on the side of censorship and creates provisions which will continue to give special protection to religion.

"The UK's national broadcaster should handle religion in a critically informed manner. And efforts to avoid causing unnecessary offence must not be excessive. The BBC risks contributing to a climate of self-censorship which is deleterious to the fundamental right to freedom of expression."

The BBC periodically reviews its editorial guidance and expects to publish its latest version early in 2019.