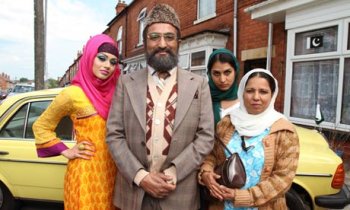 The new BBC sitcom Citizen Khan has, apparently, created something of a stir among Muslims. The BBC is reporting having received more than 200 complaints about its portrayal of the "Muslim Community", claiming it is disrespectful of Islam and full of stereotypes. Now Ofcom, the media regulator, has announced that it is launching an investigation into complaints the show is "racist".

The first episode showed a bit of promise (although at times it seemed it would have been more effective in a cartoon format) and as with all sitcoms, it will take a little time to develop and for the characters to become established.

It seems one of the elements that has irritated some Muslims is the portrayal of one of the daughters of the family who wears a hijab to please her dad (a pompous self-styled "community leader"). In secret, though, she casts it off at the first opportunity to text and carouse with her mates in thick make-up and tight pants.

It's a rather broad style of humour, but a very important step in widening understanding and acceptance of Pakistanis in our society. To see that they are able to laugh at themselves as well as be po-faced and boringly oversensitive is vitally important. To explore the uneasy clash of cultures through humour is valuable for everyone.

If this comedy is successful and the characters enter the affections of the British public, then it could do a huge service to community relations.

There was certainly no anti-Islamic sentiment, just an affectionate pop at the difficulty of maintaining a life that is completely dominated by religious demands while living in a society that is dominated by secular temptations.

The BBC's other sitcom in this genre – Rev – is more sophisticated but covers much of the same ground. Modern Britain is not particularly enamoured of religion, be it Christian or Islamic, and the tribulations and alienation of those who still cling to their beliefs are fertile ground for comedy.

Those Muslims who are protesting at the moment should calm down. Citizen Khan has the potential to do a big favour for Muslims in Britain if it is allowed to develop without every episode bringing a flood of complaints from those who are so insecure in their beliefs that they think they will crumble to dust if someone makes even a small joke about them.