Has the BBC Trust killed vigorous debate about religion on our national broadcaster? 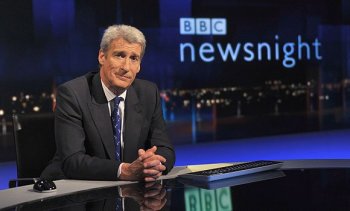 The BBC Trust – which advertises itself as the "final arbiter in complaints to the BBC" — has upheld a complaint this week against Jeremy Paxman, saying that there was no clear editorial purpose to Paxman's comments — made during an interview with Richard Dawkins on Newsnight — that religion was "myth" and "hogwash". He also suggested that those believers who thought that the Bible was literally true were "stupid".

Although the Trust — which is chaired by high profile Catholic Lord Patten — said although the comments were not made in order to deliberately offend, they did breach the guidelines and "caused offence to some of the audience."

While discussing The Magic of Reality, Dawkins' book for young people, Paxman asked: "Do you really care that there are a lot of stupid people around?"

He added that learning to suspend disbelief from childhood is "apparently also how we condition impressionable brains to absorb religious hogwash".

The viewer, who thought Paxman had deliberately caused offence to those with different views to his own, received the usual brush-off from the BBC complaints department (a technique familiar to NSS members who also complain frequently to the BBC about religious bias and hit the same brick wall.)

The broadcaster claimed the interview was conducted in "an impartial and appropriate manner" and argued that Paxman played the role of devil's advocate.

The Christian viewer who had made the complaint persisted and eventually got the response that he wanted from the BBC Trust's Editorial Standards Committee – ten months after the Newsnight item was broadcast.

The Trust ruled that Paxman's comments, while not deliberately so, "were offensive to some of the audience and that there was no clear editorial purpose for their use in the context of this Newsnight item".

Further, they concluded that the item breached their Editorial Guidelines on Harm and Offence. The report stated that "it regretted the offence caused to some viewers by the use of the terms 'religious hogwash' and 'stupid people' on this occasion".

It added that some viewers of the BBC2 Newsnight programme "were unlikely to have expected Jeremy Paxman's typically robust and confrontational interview style" to extend to the terms concerned." But the BBC Trust did not uphold the complaint with regards to impartiality and bias.

It seems the BBC Trust has a very selective approach to offence to religion. It seems religious viewers must have their hair-trigger sensitivities protected even from the mildest criticism. The same considerations do not extend, it seems, to secularists who have to put up with constant denigration on BBC programmes. The Today programme is regularly infested with bishops talking about "aggressive secularism" and "militant atheism".

We put up with it, even though any objection hits the buffers immediately. Any complaint to the BBC complaints department is almost instantly dismissed.

It seems to be the BBC complaints department's purpose is to stand as a stone wall between the programme makers and the public. Its sole purpose is to deflect criticism.

Does anyone know of an instance where the BBC complaints department has agreed that a complaint has merit and has done something about it?

Now, it seems, you can't even have a critical debate about religion on the BBC using language that is robust but fairly mild by most people's reckoning. The word "hogwash" is hardly likely to frighten the horses, yet one complainant manages to be "offended" by it and now no-one on the BBC can say it about religion, even if they mean it.

It is actually quite scary that the BBC Trust itself is so biased – who is going to investigate the "final arbiter" and its own discriminatory practices?

With this decision, the BBC Trust pulls the noose about the neck of free speech a little tighter. If you can't even say "hogwash" about religion, then debate is restricted to the point of being impossible.

One question that needs to be asked: what part did Lord Patten, the chairman of the BBC Trust, play in this decision? After all, he is the man who was brought in by the Government to organise the crawling, fawning, propaganda-fest that was the Pope's visit to this country two years ago. It is not illegitimate to ask whether he participated in this decision and if so, whether he was — or could be — completely objective on this topic.

Would he, for instance, have permitted the broadcast of Jerry Springer: the Opera as his predecessor did, despite the tens of thousands of complaints orchestrated by Stephen Green and his Christian Voice organisation? On the basis of the hogwash decision, it seems highly unlikely.