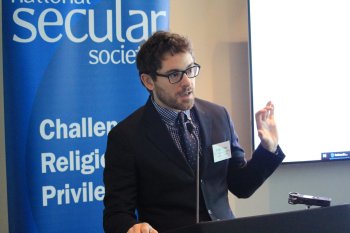 Dr Earp, a research fellow at the University of Oxford and Yale University, will address children's right to bodily autonomy.

He spoke about infant genital cutting at the NSS's Healthcare and Secularism conference in October, when he argued that all children should be entitled to autonomy over their genitals regardless of their sex.

He also warned of an "imminent collision course" in law and policy regarding different ethical standards for female, male and intersex forms of genital cutting.

Dr Earp's interests include psychology, the philosophy of science and bioethics.

"Brian Earp's superb talk at our Healthcare and Secularism conference last year made a compelling case that all children should be given the chance to control their own bodies.

"Children's freedom to accept or reject religion when they are ready to do so is too often overlooked in debates over genital cutting. We're looking forward to hearing Brian develop his thoughts on this subject as an issue of both medical ethics and religious freedom."

Secularism 2019 will explore religious freedom as a right that belongs to everyone and which has limits when it impinges on human rights such as bodily autonomy and freedom of expression.

The other confirmed speakers include Sara Khan, the government's lead commissioner for countering extremism, and Dr Ahmed Shaheed, the UN special rapporteur on freedom of religion or belief.

The keynote address at the conference will be delivered by Rachel Laser, the CEO of the US-based campaign group Americans United for Separation of Church and State.