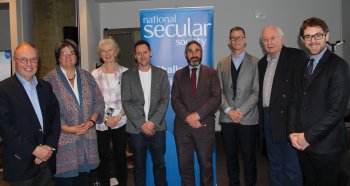 Speakers have called for individual rights and bodily autonomy to take priority over religious concerns in healthcare policy at a major National Secular Society conference on the issue.

The one-day Healthcare & Secularism Conference, which took place on Saturday at the Radisson Blu Hotel in Birmingham, gave participants the opportunity to discuss secularism's role in healthcare and medicine.

Dr Antony Lempert, chair of the Secular Medical Forum and one of the event's chief organisers, opened the conference by saying secularism empowers informed patients to make decisions that are right for them. He added that the "harmful imposition" of other people's beliefs in healthcare is causing "far too many" people to suffer.

Michael Thomson, a professor of health law, spoke about reclaiming conscience in healthcare. He said the narrative on religious freedom has been oversimplified, especially in the field of medicine.

Michael talked about the development of abortion law in particular. He said it was "quite wrong" for any doctor to put personal views before the care of a patient, and personal objections should be "overruled by professional obligation". He warned that a bill on conscientious objection tabled in January would expand the scope of practices that clinicians can refuse to provide, reducing patients' access to certain treatments.

Jayne Ozanne, a member of the Church of England's general synod who works with religious organisations around the world to eliminate discrimination based on sexuality or gender, spoke about 'gay conversion therapy' (GCT). Jayne, a gay Evangelical, referred to her own experiences of GCT and the subsequent campaigning she has done to end the practice.

Jayne said many religious people may undergo GCT because they believe being LGBT is sinful and individuals who come out as LGBT in religious communities put themselves in a position of "great vulnerability".

She added that GCT does not just involve psychological abuse but can include physical and sexual violence. Studies have found that GCT can result in self-harm, suicide attempts and problems with relationships and sexual functioning, and is ineffective in changing same-sex attraction.

The conference also focused on the issue of religiously-motivated genital cutting of children, beginning with a talk on male circumcision and the law with James Chegwidden, an Old Square Chambers barrister. He said infant ritual circumcision remains an "anomaly" with no legal justification in any field of law, even though society no longer tends to regard children as the property of their parents.

James argued that non-consensual circumcision violates article nine of the European Convention on Human Rights, which protects the right to freedom of thought, conscience and religion. He said "imposing one's religion on another is precisely what the article is designed to prevent".

Brian Earp, a cross-disciplinary research fellow at Yale and Oxford, warned of an "imminent collision course" in law and policy regarding different ethical standards for female, male and intersex forms of genital cutting.

Brian argued that biological sex should not determine the level of protection children have to intact genitalia and that all children should be entitled to genital autonomy.

Ann Furedi, chief executive of the British Pregnancy Advisory Service, spoke on standing up to opponents of abortion. She said it was wrong to criminalise women for seeking abortions or doctors for performing them, adding that recent changes to abortion law have been "phenomenal". She encouraged advocates of choice to embrace free speech to persuade the public of their position.

She argued that abortion clinic 'buffer zones' are justified because they prevent anti-abortionists stopping women from accessing abortion services. But she added that it is worth engaging with protestors outside these zones, because "the best way we can stand up to our opponents is to engage them and defeat them in argument".

The final two talks examined assisted dying. Dr Jacky Davis of Healthcare Professionals for Assisted Dying (HPAD) told the audience that 100m people now have access to assisted dying and asked why people in the UK do not.

She advocated the "Oregon law", which allows terminally ill people of sound mind and fixed purpose to receive lethal medication, as a good model for assisted dying in the UK.

Jacky said those opposing assisted dying are often influential leaders of various religious groups, but their views often don't match many of those they claim to represent. She said a group called the Christian Medical Fellowship has been particularly influential in persuading the British Medical Association (BMA) to resist the legalisation of assisted dying. HPAD has called for BMA members to be surveyed on their views on assisted dying.

The final speaker, NSS honorary associate and former chairman of the Voluntary Euthanasia Society Dr Michael Irwin, agreed with many of Jacky's points but offered alternative approaches. He said there would be a better chance of changing the law surrounding assisted dying if we were not limited to the Oregon model and the right to die were extended to others, such as those with serious degenerative diseases.

Michael argued that assisted dying is simply another way of saying "good palliative care" and is not an alternative to palliative care as opponents often argue.

The speakers also responded to audience questions after their talks.

After the event Dr Lempert thanked those who attended and described the quality of the speakers as "outstanding".

"Coming from different disciplines, backgrounds and beliefs, all speakers shared a common understanding of the central importance of caring properly for patients and for allowing patients to make their own decisions in healthcare. The theme of autonomy – a patient's right to choose for themselves what happens to their own body – ran through each of the talks.

"In an environment of shared values, this conference explored some of the major difficulties faced by some people when other people's beliefs, values and treatments are imposed on them in a variety of ways from birth through to death.

"The shared understanding of autonomy helps to show the way towards a truly secular healthcare system which would protect all patients by championing their rights to be fully informed of the available treatment options and to choose the one that's right for them."