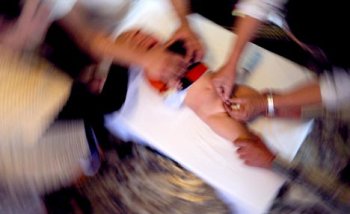 Proponents of ritual genital cutting often claim a 'right' to religious freedom justifies their position. But individuals have rights, says Dr Marika McAdam – and for boys, they include the right to autonomy over their own foreskins.

In amending laws that ban female circumcision to also prohibit circumcision of boys, Iceland is courageously deigning to apply reason to an age-old ideological issue. Its attempts have been met with the usual reactions, namely allegations that the bill is an attack against religious freedom. In raising freedom of religion and belief, the argument of pro-circumcision advocates seems to be that religious freedom somehow entails a right to remove another person's foreskin. But the rights-based line of argument cannot end there. What these parents who champion circumcision seem less enthusiastic to talk about, is the religious freedom of their children.

Parents indeed have a right to bring up their children in accordance with their religion and belief, by virtue of article 18 of the International Covenant on Civil and Political Rights (ICCPR). But that right can be limited in some circumstances, including where it conflicts with the rights of others. Freedom of religion and belief protects the right of all rights-holders to have or adopt a religion and belief of his choice in a way that is free from coercion.

The irreversible bodily modification of one person should not be allowed on the basis of the religious beliefs of another. To abandon boys to the harmful practices of their parents is the moral equivalent of denying the rights of individuals because they are voiceless and vulnerable.

Before he has the mental capacity to understand the implications of the act, the legal capacity to consent to the associated pain and risks, or the physical capacity to resist, there is a strong argument that the balance between conflicting rights should be tipped in favour of protecting the child from an irreversible mark of his parents' religion. Preventing parents from removing their son's foreskin would not prevent that baby or child from growing into a man who can choose to have his foreskin removed in accordance with his faith, but it would protect his right to one day enter a religion that does not require the absence of a foreskin.

In his 2006 speech on faith in politics, Barack Obama called on the "religiously motivated" to translate their views into universal, rather than religion-specific values, and be amenable to reason. "I might be opposed to abortion for religious reasons" he said, "but if I seek to pass a law banning the practice, I cannot simply point to the teachings of my church or evoke God's will. I have to explain why abortion violates some principle that is accessible to people of all faiths, including those with no faith at all." The same is true for circumcision. As pluralist, liberal democracies attempt to implement laws that protect rights in ways that do not discriminate against their constituents on the basis of sex, religion or other grounds, it is not good enough to challenge a law protecting children from harm on the basis of their parents' religion.

The other way that circumcision proponents attempt to differentiate MGM from FGM is by saying that the latter is not a religious practice but a cultural one, and therefore apparently not immune to reasoned critique in the same way they seem to think religious practices should be. If we are playing a game of interrogating intentions, then the implication is that secular Jews or Muslims who wish to enter their sons into their Jewish or Islamic community for cultural rather than religious reasons have a lesser claim than religiously-motivated parents do. It also implies that those parents who do circumcise their daughters for religious reasons should be permitted to, because their religious intention makes what would otherwise be barbaric now somehow palatable.

If it does not, it must be asked what principle proponents of male circumcision are actually defending. Consider the emergence of a hypothetical new religious movement that tattooed or pierced the penises and labia of babies or toddlers, or perhaps less invasively merely branded their buttocks as a manifestation of religious belief. Unless Jews and Muslims are prepared to defend the practices of these parents alongside their own, then it could be reasonably concluded that they may not be arguing from a place of principle after all.

The reason why advocates of male circumcision have been spared the full weight of rights-based critique at the level of international law is not because they have better reasons or sounder arguments. It is because they have strength of numbers and a voice of such volume that it carries the monopoly on how their religion is to be practiced.

But there are people within the two major circumcising faiths who are making individual choices not to perpetuate the practice while still maintaining their religious identity. They have a right to practice their religion as they choose (within parameters including those set by the rights and freedoms of others), and the fact they are making choices to reject some practices is a sign that like all religions, these ones too are evolving. Indeed, some religions once sacrificed more than foreskins.

Human rights belong to individuals, meaning that human rights law cannot prefer some religions or versions of religions over others. Rather, it must be applied and interpreted in a way that takes all religious practices on face value, irrespective of the religion or belief being manifested, and must make determinations that serve to increase religious freedom rather than erode it.

Since the pro-circumcision camp has put religious freedom on the table, let us talk about it. And let us start by asking how parents in favour of circumcision can assert their right to freedom of religion and belief on the one hand, while denying it from their children on the other.

Marika McAdam (PhD) is the author of 'Freedom from Religion and Human rights law'. The views expressed in our blogs are those of the author and may not necessarily represent the views of the NSS. Follow Marika on Twitter: @Marika_McAdam