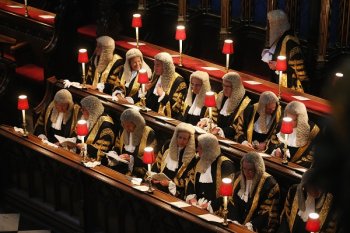 Secular lawyers have called for a separation of the Church of England from judicial affairs after judges marked the start of the legal year with an Anglican service.

The annual Judges' Service, held today (1 October) at Westminster Abbey, was attended by the Lord Chancellor and Secretary of State for Justice, the Lord Chief Justice, judges and other members of the legal profession.

The Lawyers' Secular Society (LSS) criticised the ceremony, calling it an "inappropriate reinforcement of the link between the Church and the state" and have called on the justice secretary, Chris Grayling, to discontinue the annual ritual.

LSS members Peter Fisher, a retired Ministry of Justice civil servant, and John Butcher, a Surrey councillor, say the service has a potential impact on the impartiality, or perceived impartiality of judges attending it and warn that the service runs the risk of undermining public confidence in the judiciary.

The service has its roots in the religious practice of judges praying for guidance at the beginning of the legal term. The custom dates back to the Middle Ages when the High Court was held in Westminster Hall and judges would walk over to Westminster Abbey for the service.

Members of judiciary attending the service do so in their official capacity, during working hours, wearing their judicial robes. The service itself is held in private; and is not open to the public and the media.

Charlie Klendjian, secretary of the Lawyers' Secular Society, said: "Democracy is an ever-evolving and ever-improving process. The machinery of democracy, which most certainly includes its legal system, must keep up with that drumbeat and we have every right to expect a fully secular legal system. It is high time this archaic service was abolished."