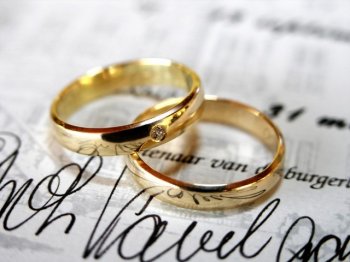 A Liberal Democrat MP has tabled an amendment to the proposed same-sex marriage bill proposing a complete separation of state marriage and religious weddings.

Greg Mulholland, Liberal Democrat MP for Leeds North wants to repeal the 1949 Marriage Act and the 2004 Civil Partnerships Act, remove clauses in the 1973 Matrimonial Causes Act for the ending of marriages on the grounds of adultery or non-consummation, and would ban religious ceremonies from state marriages carried out by civil registrars.

The amendment will face intense opposition from MPs. However, Mr Mulholland argues that separating state and religious marriage is the only way to ensure equality and freedom of religion.

"The Marriage Bill neither delivers equal marriage nor adequately protects freedom of conscience," he said. "The way to deliver both is a proper separation of civil and religious marriage, so it is clear that civil recognition of relationships is a matter for the state, defined in law, and this should be the same for all couples, but at the same time then allowing belief-based organisations to marry whoever they want according to what they believe marriage to mean.

"This is the liberal and the fair approach, but also the commonsensical one that would deliver equality and tolerance and would avoid some of the pitfalls of the Bill as drafted."

Already speculation is rife that in the unlikely event of this amendment being accepted, it would eventually lead to the disestablishment of the Church of England.

Mr Mulholland was one of seven Liberal Democrat MPs to abstain from voting on the same-sex marriage bill in February.

The bill will go to a third reading in the House of Commons in the near future, before proceeding to the House of Lords.

Meanwhile, in Ireland, the bishops have warned that the Church should refuse to perform the civil elements of weddings if same-sex marriage is introduced.

The Church in Ireland provides the majority of marriage solemnisers in the republic. Around 4,300 out of the 5,600 on the register are Catholic priests.

The issue is being considered by a Constitutional Convention as recognition of same-sex marriage would require an amendment to the Irish constitution. The constitution requires the state to guard the institution of marriage with "special care" and "protect it against attack".

Over 1,000 submissions have been made on the issue to the Constitutional Convention including a 10-page written submission from the Irish hierarchy. In this document, the Bishops' Council for Marriage and Family signalled a willingness to withdraw the Church's services to solemnisers in protest.

Should this happen, up to 70% of marriages could be affected.

In their submission, the bishops stated: "It is important to note that in Ireland, the Church and the State co-operate closely in the solemnisation of marriages. Any change to the definition of marriage would create great difficulties and in the light of this, if there were two totally different definitions of marriage, the Church could no longer carry out the civil element."

This could mean the republic would have to adopt a similar model to other European countries where Catholics would have to get married in a register office as well as taking part in a religious ceremony in church.

Legal recognition for civil partnerships in Ireland was granted in 2010 and gave same-sex couples most of the rights afforded to married couples.