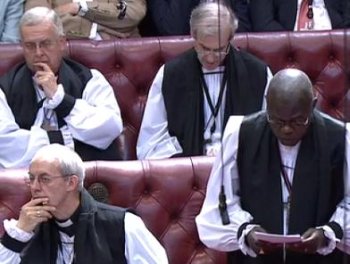 The National Secular Society's Executive Director, Keith Porteous Wood, has criticised Church of England leaders for their record on gay rights after they spoke out on the subject.

Writing in the online Pink News, he said the Archbishops of Canterbury and York should be "judged by their actions rather than their words".

He was responding to a piece by Justin Welby and John Sentamu, written last week in the same magazine to mark the 50th anniversary of the partial decriminalisation of homosexuality. Under the unedifying title 'Gay people are not more sinful than anyone else', the Archbishops wrote that "Sin is not a characteristic of a particular group of people".

Mr Porteous Wood argued that neither this, nor the numerous religious references in the original piece, were likely to cut any ice with the vast majority of the intended audience. Pink News is largely read by young LGBT+ people.

He said the piece "has been greeted with well-deserved cynicism" by many of the magazine's readers. The height of the Church's ambition appeared to be denouncing "diminishing and criminalising homosexual people" as "wrong", and not all of the Church agree even on that. Crucially they failed to even mention equal civil rights or statutory protection from discrimination for LGBT+ people.

He said the Archbishops were "hardly setting the bar very high" in stating that "diminishing and criminalising homosexual people is wrong". He criticised the Archbishops for not mentioning the "gratuitous hurt and indeed persecution" that Christianity had caused to LGBT+ people over the centuries, and for not referring to equal civil rights or statutory protections from discrimination.

Nor had they come clean about Church doctrine which "still holds that same-sex intimacy, even within a committed relationship, is sinful and 'to be met by a call to repentance'". He added that at least one member of the Church's General Synod is working internationally to retain laws criminalising homosexuality.

He also argued that the Church had become more hostile to gay rights in the last 50 years. Clergy opposing these rights had become "much more entrenched and outspoken", while its parishoners have become more liberal. Gay clergy in lawful same sex civil marriages have even been barred from jobs.

The archbishops claimed "This anniversary of the 1967 Act is one when the Church in this land should be conscious of the need to turn away from condemnation of people as its first response." Mr Porteous Wood responded that none of the bishops in the House of Lords voted for the same-sex marriage bill in 2013. They "turned out in record numbers to support a 'wrecking amendment' to it". Their response to civil partnerships legislation was similar.

He drew attention to the "anachronism" of the Westminster parliament being the only one to give bishops a seat as of right. He also highlighted how much more conservative the bishops had become, relative to society as a whole and even Anglicans in the pews. He argued that this is incompatible with being a national church. The NSS believes the Church should be disestablished.

He concluded by predicting the Church would face a humiliating climb down on same-sex marriage.

The National Secular Society has long campaigned for LGBT+ rights not to be undermined by religious demands.