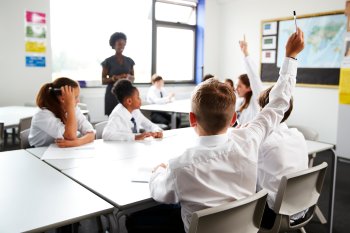 In a recent speech at the annual Festival of Education conference Amanda Spielman, head of Ofsted, touched on issues with activism in schools. While acknowledging the many positive contributions of activism to education, she criticised "the militant kind" which leads to "confrontational approaches both outside and inside schools".

She went on to talk about the impact on children having to "cross what amount to picket lines outside their school because one group's religious beliefs – protected by law – sit uncomfortably with teaching about another group's sexuality – also protected by law".

We've seen this play out with protests outside school gates and misinformation campaigns organised against relationships and sex education (RSE). In Batley a mob forced a religious education (RE) teacher into hiding over a lesson on blasphemy - and reactionaries have since hounded the Labour candidate during the recent by-election with homophobic abuse, largely because of her support of inclusive RSE.

It's important to cut through the euphemism and talk about the specific subjects and topics that reactionary religious groups are organising around. They want schools to uphold taboos against LGBT identities, contraceptives, sex and blasphemy. They use euphemisms such as protecting children – a longstanding dog whistle used to frame LGBT people as a threat and talk the language of community engagement – when they want to be treated as gatekeepers regardless of what the wider community may want.

Currently it is conservative Islamic groups leading the charge, but this is not confined to one group. Anti-LGBT Christian groups have supported these protests. How long before other religious groups start mobilising on their own pet issues? Some white parents object to schools teaching about racism and colonialism. Some Hindu groups are bitterly opposed to caste discrimination being mentioned in A-level coverage of Hinduism. Where religious authorities control schools, very little outside pressure is needed to enforce such taboos.

The number of schools that will have religious mobs baying at their gates may be relatively small, but many more will be intimidated into silence. We've seen these tactics and the effects they have before. In 2011 researchers at Penn State University published a study showing that only 13% of US science teachers were sympathetic to creationist beliefs, but the real threat to scientific literacy was the 60% who avoided teaching about evolution to avoid conflict or controversy.

RE students tend to be particularly interested in discussions about the conflicts between religious beliefs and wider societal values. Examiners have told me that questions about religious objections to abortion or providing services to LGBT couples are among the most popular options chosen in exams as they are perceived as more relevant than scriptural questions.

If you want to discuss contemporary religious issues, then I can think of very few more pertinent than debates over offending Islamic blasphemy taboos. Any student passionate about RE would love to debate the lines between free speech, religious criticism, and needless offence. After Batley, many won't get the chance. I expect many teachers will be quietly putting that particular lesson plan in the bin.

I suspect that few teachers or schools will actively support Islamic, or other religious, blasphemy taboos or homophobia, but many will seek to avoid this conflict. There are currently structural issues of religious privilege within RE and RSE which encourage this strategy for schools, and which encourage religious parents to demand concessions.

Our system of religious education assumes that religious groups should be gatekeepers and producer communities - meaning they should decide, through the system of SACREs and their dominance of the market in resources, how religions are covered.

Good teaching about religion should challenge prejudice against and between people with differing beliefs. Challenging discrimination is not always consistent with protecting everyone's religious feelings. An academic study in 2018 showed that most RE teachers see it as their job to address prejudice by prioritising positive views of religion over critical exploration. Evidence from the same authors, reported last week, suggests this holds regardless of teachers' personal beliefs. This positivity bias primes teachers to back off from topics that might make religions look bad. A lot of discussion of the Batley affair in RE communities had an underlying suspicion of the teacher's motives given this potential.

Current government guidance allows schools to teach RSE from a religious perspective. This was designed to appease religious objectors. It allows faith schools to continue to teach the subject in a discriminatory way. This creates the unreasonable expectation that content will be restricted on religious grounds. All RSE should be age appropriate, but this is poorly defined and is used by religious groups to try to push any coverage of LGBT issues out, particularly in primary schools. The current guidance opens the door to this: just this week, Ofsted has said schools want it to be clearer.

The consultation requirements in the guidance and legislation on RSE are intended to help schools form a partnership with parents, understand cultural perspectives and concerns, and tweak their planned content to be most effective. However, these are exploited by religious groups whose real target and demand is getting rid of RSE. They will always demand more consultation and more concessions, not out of a genuine desire to improve the subject, but to sap schools' time and energy to try and intimidate them into giving in.

In both subjects, guidance should make clear that schools are not expected to conform to the prejudices of parents or religious gatekeepers.

We also need a wider cultural change, so that teachers feel confident delivering the curriculum even when some pupils, or their families, may find it challenging or controversial. Parents and communities need to know that although their views will be heard, they do not get a veto. When covering controversial cultural issues teachers need to be given some benefit of the doubt, even when they don't handle an issue perfectly, and they need to know they will be supported.