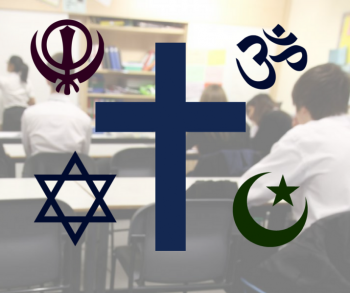 "Well-intentioned" religious education teachers are undermining the subject by framing religion as intrinsically positive and glossing over its negative side, academics have warned.

In an article in the journal Religions David Smith, Graeme Nixon and Jo Pearce warned that knowledge was being distorted as teachers attempted to use RE primarily to combat prejudice.

A survey of 465 RE teachers found that 60% "absolutely agree" that "religion should be taught in a positive way in RE". Six per cent did not agree, with the remainder "moderately" (16%), "somewhat" (13%) or "slightly" (five per cent) agreeing.

There were significant variations between RE teachers who identify as theists and others – who were about equally balanced - between those who taught religion as inherently positive and those who did not.

When invited to give further detail, the teachers frequently stressed the importance of presenting positive manifestations of religion as more authentic, in order to "counteract prejudices".

Another teacher warned: "It seems that most RE teachers and resources tend to pick the nice bits and shy away from some controversies, especially in primary schools and faith schools. Children are guided towards a biased understanding of religion."

When the authors codified these qualitative responses, they found 35% of teachers advocated teaching both a positive and negative view of religion. Twenty-two per cent advocated a purely positive view; 19% a critical one; 15% an objective one; and nine per cent an essentialised one.

But even where respondents stressed the importance of critical accounts, their written responses often framed this as a critical examination of the positives of 'real' religion and the negatives of 'distorted' religion.

The authors said framing religion as intrinsically good or bad undermines religious literacy in both education and public dialogue.

"Both negative and positive essentialist conceptualisations of religion exist. In light of the strand of cultural discourse outlined above, our concern is with the latter.

"In seeking to essentialise religion and to proscribe it with a set of positive, pro-social, attributes, the self-understanding of some religious adherents is unjustifiably discounted — and religion is sanitised by being cleansed of any negative, anti-social, connotations."

The authors also warned of the risks of prioritising respect over understanding.

"If RE is principally conceptualised instrumentally as combating prejudice and fostering community cohesion, rather than as the pursuit of knowledge and understanding of religion, there is a risk that knowledge is selected to serve instrumental goals and is thereby distorted."

"These findings bring to light an often overlooked and unintended consequence of well-meaning efforts to promote balance and tolerance in religious education. Most of the RE community pay lip service to teaching the good and the bad and we often hear passionately about teaching the 'warts and all' of religion. However, while RE has (outside of faith schools) largely moved on from confessionalism, it is still treated by many as a rose-tinted advertising space for approved representatives of different beliefs.

"Over recent decades western societies have grappled with the twin phenomena of violence perpetrated by religious groups, and bigotry targeted against religious groups. The highest profile of these in Europe have been Islamist violence and anti-Muslim bigotry. Not wishing to legitimise such forces, RE teachers have been pressured to follow the lead of politicians who frame this violence as a 'distortion' of, or 'nothing to do with' religion. This leaves judges, politicians and commentators straying into the wilds of amateur theology and leaves teachers imposing taboos.

"The demagogue motivated by their faith to spew hatred and bigotry has just as much right to view their interpretation of religion as correct as the humanitarian motivated by that same faith to spread love and tolerance.

"To label one manifestation as the 'real' religion or 'correct' interpretation patronises students and leaves them with an impoverished understanding of the relationships between belief, identity and action. Education can and should tackle prejudice but whitewashing religion can stoke misunderstanding, resentment, bigotry and prejudice."

The NSS campaigns for children to have a national entitlement to high quality, non-partisan education which covers the diversity of religious and non-religious worldviews in a critically-informed way.

See also: How RE teachers see religion – and why it can be bad for pupils, by the authors