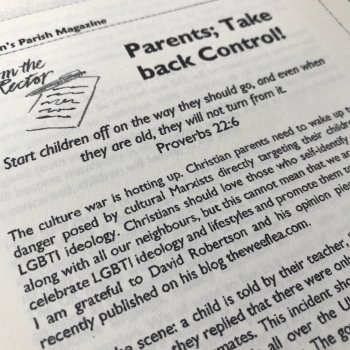 A school is investigating a governor who called LGBT-inclusive education "child grooming" and said it "opens the door for sexual predators" in remarks first highlighted by the National Secular Society.

St Alban's Church of England Primary School in Rotherham and its academies trust say they have opened a "due process" after the NSS wrote to them to highlight Peter Hughes's comments.

Hughes, a local reverend and ex-officio school governor, called on Christian parents to "take back control" and "follow the example" of Muslims behind recent school protests in a church magazine.

He called the government's proposed relationships and sex education (RSE) programme "nothing but state sponsored child abuse" and said pupils "all over the UK" are being "indoctrinated in culturally Marxist LGBTI ideology".

The NSS wrote to the school's executive headteacher Alison Adair to highlight the remarks and question Hughes's suitability to be a governor last week.

In response the school and the Diocese of Sheffield Academies Trust said they had opened a process which is followed if they "feel any governor has brought the school or academy into disrepute". The process includes "a full investigation before a decision is made" regarding Hughes's position.

NSS spokesperson Chris Sloggett said the investigation was "welcome" but added that "wider lessons should be learnt from this episode".

"The school and diocese have responded reasonably to Reverend Hughes's remarks. His spreading of misinformation about LGBT-inclusive education and his endorsement of the bullying campaign against this teaching have rightly brought his fitness to be a school governor into serious question.

"But he was given his position as a governor simply because he was a religious official. Governors' suitability should be decided on a secular basis, and for that to happen the government needs to roll back faith-based education.

"Religious officials should be able to express their opinions without the risk that doing so would automatically bring their local school into disrepute. For that to happen they need to be judged as ordinary citizens, rather than being given roles in the running of local schools solely on the basis of their religious status."

In his remarks Hughes accused "LGBTI activists" of "imposing a sexual philosophy which at its heart is both anti-Christian and harmful" via "the Trojan horse of teaching tolerance and opposing bullying".

He said activists "greatly exaggerate" the extent of bullying and that bullying would be better deterred by teaching "the biblical truth that every person is made in the image of God".

Hughes is the governor designated with responsibility for combating bullying at the school.

Ex-officio governors are normally appointed by the local church diocese's education board to promote its ethos and interests. Usually one governor must be the parish priest.

The school and trust said they were "fully behind" Department for Education proposals to make RSE statutory from 2020.

Update (2 July 2019): Peter Hughes has resigned from his role as a school governor.