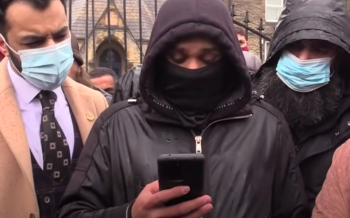 The hand-wringing in the face of a vicious campaign against a teacher sends a demoralising message to those fighting for free speech on religion globally and in British Muslim communities, says Kunwar Khuldune Shahid.

The Batley Grammar School teacher who has been suspended, and gone into hiding, after showing a caricature of Islam's prophet Muhammad in class last week, now understandably worries that he might be killed. While the Muslim Council of Britain (MCB) worries that the teacher may have shown an image that "plays into" an "Islamophobic trope", and many on the Western left similarly wring their hands, it remains unclear if fearing for one's life over offending Islam also constitutes a phobia. Others, graciously, have responded by quickly condemning 'extremists on both sides', as if the defence of liberal principles were equivalent to Islamist intimidation.

After the satirical French publication Charlie Hebdo was targeted in a jihadist attack, the gruesome murder of its journalists was rationalised through the 'Islamophobia' that it was guilty of, for treating Islam like any other religion. When French schoolteacher Samuel Paty was decapitated after showing Charlie Hebdo's caricatures in school, 'Islamophobia' once again became the rallying cry.

At first it was a publication's act of satirising Islam that translated into asking to be murdered. Now it's teachers showing those cartoons in lessons on blasphemy that is translating into 'asking for it'. Next it may well be critics of this blatant endorsement of Islamic blasphemy laws in the West who might 'ask for it'.

This gruesome eventuality has long been a reality in Muslim-majority countries, where individuals have been killed for mere criticism of the blasphemy laws. A dozen Muslim states sanction death for blasphemy and apostasy, and 20 mandate prison sentences. The day the Batley Grammar School teacher was suspended, and left at the mercy of radical Islamists, yet another man was killed for blasphemy in Pakistan. Since then, over the past week, radical Islamists have initiated violent protests in Bangladesh demanding, among other means of institutionalised persecution, capital punishment for blasphemy against Islam. On Tuesday, a man was burnt to death in Nigeria for 'insulting prophet Muhammad'.

It is impossible to separate the Islamist blasphemy laws in Muslim-majority countries and the demands to silence critique, caricaturing and satire of Islam by Muslim minorities. It shouldn't need saying but it is actually possible to uncompromisingly defend the rights of minorities, and shield them from majoritarian groups, without mollycoddling them over regressive and often downright bigoted beliefs.

Similarly, drawing cartoons or mocking religious beliefs as satire, or exposing believers to ideas completely antipodal to their beliefs in critical learning settings, do not constitute persecution. An offence, or its gravity, needs to be universally applicable and cannot be determined by the reaction of a group. Otherwise, we're a Hindutva attack on a steakhouse away from equating beef cuisine with persecution of Hindus.

Sketches or depictions of Muhammad are no more prohibited in Islam than cow slaughter is in Hinduism; or more poignantly, no more offensive than Hindu wives outliving husbands was two centuries ago. Europe consumed centuries over 'religion wars' between Christian sects which found one another's beliefs offensive. The rise of a radical, and puritanical, literalist brand of Islam, impacting Muslim majorities and minorities alike, is a corollary of a similar sectarian warfare within Islam today.

Some interpretations of Islam have long incorporated the tradition of drawing Muhammad, which means that the ubiquitous claims masquerading as fact that 'Islam prohibits depictions of Muhammad' or that 'Muslims are offended' by such illustrations paints all Muslims with a monolithic, and arguably regressive, brush.

However, even if there is a 'true' version of religion that might uphold certain beliefs, and even if every single one of its billions of adherents were to endorse them identically, that still cannot be used as justification to suppress rights, including the fundamental freedom of speech. And the only legal asterisk on this right should be explicit incitement to violence.

Again, to hold offended sensibilities as the limit of free speech is to not only fail miserably in understanding the very need for protection of such a freedom — since what is acceptable by all doesn't have to be guarded. It is also to constantly lower the threshold of what is 'offensive'. Even more critically, it can shield ideologues from countering viewpoints, which often is the raison d'etre of protests undertaken by those believing their ideas to be the ultimate truth.

Perhaps most pungently, endorsement of this censorship on the part of Western liberals makes it harder to normalise criticism of religion and undermines the fight against Islamic blasphemy laws that hang like a sword over millions in Muslim-majority countries. More than just an ideological regression on the part of the left, such upholding of Islamist ideas has even translated into European courts upholding blasphemy laws that many from Muslim majority countries are escaping from. And in acquiescing to the Islamist narrative in the garb of 'protecting Muslims', liberals in the West have not only abandoned dissidents in Muslim-majority countries, they have also helped facilitate regression of Muslim minorities in their own countries.

When the MCB's first ever female leader was asked questions that would be considered extremely basic for any other community, those otherwise unflinching in their quest for gender quality instinctively shouted 'Islamophobia'. Much of the western left embraces the MCB's calls for 'inclusivity' and 'care' when faced with cartoons. It showed less interest when, for example, an Ahmadi Muslim shopkeeper was killed in an Islamist attack in 2016 – and the Muslim Council of Britain's focus was declaring that 'Ahmadis are not Muslims'.

Shouldn't such marginalisation or violence committed for Islam, or the fear of one's life over cartoons on Islam, be the bigger concern here?

Shouldn't more energy be dedicated towards elimination of this widespread belief, codified in many Muslim-majority countries, but also preached in many mosques in the West, that blasphemy against Islam merits death?

One doesn't have to be a linguist to discern the contrast between statements issued by many Muslim community groups over killings in the name of Islam, and satire of Islam.

Indeed, Western liberals are complicit in facilitating these Islamic blasphemy narratives around the world. For, when states otherwise upholding free speech on religion start backtracking, those living in countries where blasphemy still mandates death will have little hope.

Listen to Kunwar Khuldune Shahid on the NSS Podcast

You can listen to an interview with Kunwar Khuldune Shahid on a recent NSS podcast in which we cover Islamist ideology, jihadism, blasphemy, and the importance of free speech. Listen now.