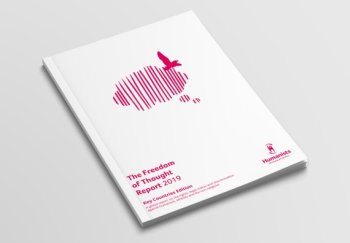 Sixty-nine countries have blasphemy laws and penalties have hardened in parts of the world in recent years, according to a report on the status and rights of the non-religious.

The 2019 edition of the Freedom of Thought Report, from Humanists International, has found that blasphemy is punishable by death in six countries.

Eighteen countries outlaw 'apostasy' – leaving a religious tradition – and in 12 of them it is punishable by death. The report says people can effectively be put to death for expressing atheism in 13 countries.

The figures come despite the fact that blasphemy laws have been repealed in eight countries in the last five years. Six of these countries are in Europe. Legislation is also pending in Ireland, following a referendum vote to repeal its blasphemy law.

The report identifies Saudi Arabia and Pakistan as "perennial" prosecutors for blasphemy and says freedom of thought is particularly penalised by Islamic penal codes and sharia-influenced laws.

It notes that accused atheists suffer from ongoing imprisonment and extrajudicial violence in Pakistan – despite the high-profile release of Asia Bibi, who spent eight years on death row for blasphemy. It also notes that criticism of Pakistan's blasphemy law is often denounced as itself an act of blasphemy, meaning critics are at risk of condemnation and even assassination.

The report also identifies several countries where freedom of thought on religion is deteriorating, most significantly:

The report also highlights the extent to which states enforce a particular religious orthodoxy. It ranks countries according to their record in four categories: constitution and the government; education and children's rights; society and community; and expression and advocacy of humanist values.

Those with the gravest violations in each category tend to be in the Middle East and Africa – along with China, where the government is currently clamping down severely on religious expression.

Responses to the report

National Secular Society spokesperson Chris Sloggett said: "Blasphemy and apostasy laws are always an affront to the fundamental rights to freedom of expression and belief, and are never justifiable.

"This report shows that these laws and state enforcement of religious doctrine plague societies and undermine individual rights around much of the world. Politicians must face global pressure to repeal these unjust laws.

"Politicians in the UK should take a keen interest in this repression in their dealings with other countries. And they should lead by example by promoting free speech on religion as a positive value and the separation of religion and politics at home."

Humanists International president Andrew Copson said repealing blasphemy and apostasy laws "must be a priority". He added that doing so would "begin to de-legitimise the religious extremism that threatens so many societies across so much of the planet".