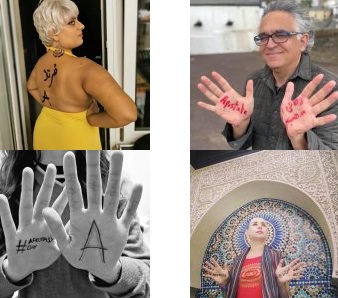 The first Apostasy Day has highlighted the human rights abuses facing many who leave Islam. To stand up for them we must ensure the religion isn't given special protection, says Kunwar Khuldune Shahid.

On 22 August, an international coalition of ex-Muslim groups observed the first Apostasy Day. The organisers sought to highlight the human rights abuses which are committed against those who leave Islam. But just like the issue it aimed to highlight, the day failed to garner much coverage in the Western media.

This was a small illustration of the treatment which those leaving Islam routinely face. And that treatment isn't helped by the ongoing tussle between the global left and right, which often leaves dissenting Muslim voices at the mercy of radical Islamists.

In his recent campaign ad for Muslims, Democratic US presidential nominee Joe Biden quoted a hadith (saying) of Islam's prophet Muhammad. Biden, a veteran politician who has challenged Christian orthodoxy for decades, also wants more Islam to be taught in US schools.

Given the recent rise of anti-Muslim sentiments in the US, and the explicitly anti-Muslim measures introduced by the Trump administration, it is understandable that a self-proclaimed liberal political campaign would want to reassure a targeted minority. However, what contradicts the very essence of sociopolitical liberalism is painting a community with the same brush to imagine a uniform vote bank, and then to pander to it by endorsing the teaching of millennia old religious dogma, which secularist Muslims have long been fighting against.

The split between the Western left and right on Islam has seen the two wings position themselves based on their respective takes on Christianity. On the right, this can mean indulging exclusionary Christian nationalism. On the left's part, it unveils centripetal holes in its fight for equality, and aggravates the inertia against Muslim progress.

For instance, where Biden has declared LGBTQ rights a legislative priority and the 'civil rights issue of our time', he's unlikely to address the prevalent homophobia among American Muslims — let alone in Muslim majority countries. But the only states still mandating death for homosexuality are Islamic. Those states justify capital punishment through parts of the same theology that the Democratic nominee now wants to give more prominence in schools.

Even so, where the left has been guilty of silence, if not acquiescence, on Islamic homophobia, misogyny, and suppression of other marginalised groups, perhaps the greatest travesty is its abandonment of Muslim freethinkers.

If there is one subject where the self-avowed progressives haven't just flirted with Islamism, but have actually surrendered to it, it's blasphemy against Islam. This capitulation has ranged from the media's cowardly refusal to publish caricatures for which cartoonists are violently attacked, to the European Court of Human Rights actually upholding the Islamic blasphemy law — even if not the violence associated with it — that individuals like Asia Bibi have had to escape from.

This ostensibly well-meaning shielding of Islam, and the fabrication of a collective 'Muslim response' to critique of Islam, blatantly silences the marginalised liberal voices from this part of the world. This was epitomised by publications from the Arab world, Iran and Pakistan, defying the murderous blasphemy laws, and threats of violence, to express solidarity with Charlie Hebdo following the 2015 terror attack, only to see the mainstream Western media instead digging into the French publication's 'Islamophobia'. Similar allegations are being levelled in light of Charlie Hebdo's decision to republish those cartoons this week to coincide with the trial against the alleged abettors of the 2015 attack. For many on the left, any publication that treats Islam like any other religion, or echoes liberal Muslim voices over criticism of Islamist politics, is 'Islamophobic'.

Similar self-defeatism can be seen in the seemingly 'woke' vigilantism against former slave traders in the West, without nary a murmur on the modern day slavery in the Arab world, let alone Islamic history. The celebration of Islamist tools of subjugation like the hijab, despite millions being under its coercion, further delineates why Muslim dissidents being killed or silenced by Islamic law doesn't quite muster collective outrage.

The Apostasy Day rang a reminder that there still are 12 states that codify death for dissent against one religion. Where that should merit a global uproar, that religion is instead provided exclusive protection through a combination of gory blasphemy laws, and the treacherous label of 'Islamophobia', which is often used to shield the ideology more than the community.

As a result, where the Western press brims over with coverage of 'Islamophobia', often equating critique of religion with racism, blasphemy laws continue taking lives for mere allegations of what is deemed a 'phobia'—an irrational fear. Thanks to the duplicity in the West, and hypocrisy in many Muslim majority states, one can now be accused of being an 'Islamophobe' in places where dissent against Islam is punishable by death. Often the use of the word 'Islamophobia' is a grotesque insult to the millions living under perfectly rational fear in such countries.

This abandonment of Muslim heritage freethinkers also unravels the growing penchant for performative activism. For, when there's no public appreciation to be mustered from the millions who would be coming out as irreligious and sacrilegious through their 'likes' or 'retweets', there's less of an incentive to speak up for those unlikely to risk their lives to become followers on social media.

Today, many Islamic states have implemented sharia-laden cybercrime legislations which have endangered anonymous accounts, in response to Muslim critical thinking finding safe spaces on the internet. Many Muslim heritage atheists often use pseudonyms for security, even in the West.

Freethinkers from Nigeria to Bangladesh are being silenced for challenging Islamic orthodoxy. These aren't isolated incidents that can be lumped as victims of societal radicalism. They are the direct corollary of elevating Islam above criticism.

In spite of the Islamic laws, and their parallel digital implementation, anonymous denunciation of Islam is fast growing from the Middle East to South Asia. But from the Mu'tazila in 8th century Iraq, to 19th century Egypt, Turkey and Iran, to the anonymous ex-Muslims online today, efforts toward Muslim reform have been thwarted by a combination of global politics and Islamist stranglehold.

That can only change through a consistent approach to human rights, rather than by standing on the wrong side of Muslim history.

Image: Activists lend their support to the first Apostasy Day on 22 August.