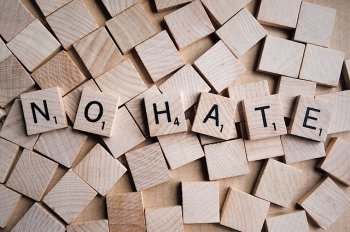 What is causing this apparent rise and what can we do about it? Undoubtable, efforts to increase reporting are a significant factor, as the report says: "These large percentage increases across all three strands may suggest that increases are due to the improvements made by the police into their identification and recording of hate crime offences and more people coming forward to report these crimes rather than a genuine increase."

However, any level of hate aggravated crime which marginalise entire groups of people should concern us. We've seen efforts to drive out and silence unpopular opinions. But there is hateful rhetoric that – while it shouldn't be criminalised – must be confronted and driven from polite society.

An attack on people's rights to peacefully practice their faith is as much an attack on secularism as having these practices imposed on others. However people feel about religion, surely few of us want a world where people with (or who have left) certain faiths are afraid to walk down the street? What would be the point of a society free from religious privilege if it didn't protect us all from religious discrimination?

I don't think there is any general correlation between hostility to religion and hostility to religious people – indeed less religious countries tend to have lower levels of intolerance across a wide range of measures - though we have surely all seen examples where this happens. Those of us who challenge either religion or its privilege need to be prepared to stand against such hate.

The NSS has long supported improved reporting and understanding of hate aggravated crimes, as part of our related efforts to challenge all forms of bigotry and to protect freedom of expression. The reporting of these figures – along with the suggestion of expanding hate aggravated crimes to other protected characteristics including sex/gender – reveal a lot of confusion around hate crime.

There's a lot these figures don't capture which means nuance is missed. For example the figures do not capture intrareligious hate crime, i.e. hate crimes against one particular group by another member of that group. This may include, for example, a Muslim shop owner attacked by a fellow Muslim for wishing his customers a Merry Christmas or a Sikh woman attacked by a fellow Sikh for marrying outside the faith. We don't know the extent to which racial and religious hate crime are conflated, or the extent to which hate crime against LGBT people (13% of offences, up 27%) is religiously motivated.

The research seems to strongly suggest that anti-Muslim hate crime spikes following Islamist terrorist incidents – after all it is a significant aim of both Islamist and anti-Muslim extremists to drive a wedge between British Muslims and the wider population. The exact cause of this spike are complicated and are likely driven by a top of mind effect:

Where hate aggravates an underlying crime (i.e. an action that would be a crime with or without the hate element) this carries an additional wider social harm which we have an interest in preventing. The concept of hate aggravated crime is already maligned, and risks completely losing legitimacy if this specific aim is expanded to criminalise hate itself, the definition of which will inevitably be expanded criminalising unpopular opinions.

The National Secular Society has been one of the leading organisations ensuring that legitimate public order offences are not expanded to criminalise viewpoints or free expression. We're a founding member of the Defend Free Speech Campaign – the same coalition which stopped the government outlawing "annoying" behaviour and repealed Section 5 of the Public Order Act which criminalised "insulting" behaviour. We helped secure the crucial free speech provision in the Racial and Religious Hatred Act which prevents it being used as a back door blasphemy law.

Criminal law is not the best way to tackle obnoxious and bigoted views. Nor is expanding the reach of the state into to Orwellian and murky area of 'non-crime'. But a liberal democracy is entitled to support measures such as education and civil society responses that challenge hatred and bigotry. Despite gnashing of teeth in some quarters a poster asking people not be homophobic isn't the precursor to the outlawing of Christianity, any more than a school assembly about racism is.

We know that extremist groups – whether of the Islamist, white nationalist or any other variety – exploit and promote grievances both real and imagined. Conflating views these people don't like with hate crime will only empower them further. We must resist those – whether their intentions are good or ill – who want to use these figures and the victims they represent to silence ideas to impose a new form of blasphemy law.