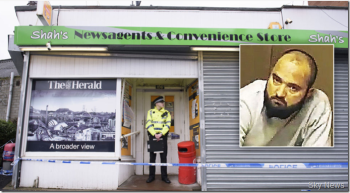 An MP has urged the Scottish Government to take action after Tanver Ahmed, who killed Ahmadi Muslim shopkeeper Asad Shah, released another anti-Ahmadi recording from prison.

Labour MP Siobhain McDonagh has written to the Scottish Cabinet Secretary for Justice, Michael Matheson MSP, urging him to ensure that Ahmed's "access to media and recording equipment" is "curtailed immediately."

McDonagh wrote: "You will be aware that Mr Shah was targeted by Ahmed for his peaceful Ahmadi beliefs. Mr Asad Shah was the first Ahmadi Muslim to be killed in the UK for his beliefs, targeted as a result of his peaceful posts on social media.

"And yet, despite Tanveer Ahmed's incarceration, he continues to spread his message of hate, recently recording a message for extremist websites in Urdu calling on his supporters to 'eliminate enemies of Islam'."

The MP, who is Chair of the All-Party Parliamentary Group of the Ahmadiyya Muslim Community, has also written to the Chief Executive of the Scottish Prison Service.

She added that "groups or Imams who support this hateful cause operating and preaching" in Scotland "must be stopped."

McDonagh said it was "unfathomable" that Ahmed "can spread his message of hate from prison" and that the Scottish Prison Service "must act".

Two recordings have been released by Ahmed from his cell, the first in September. The most recent recording praises Mumtaz Qadri, the terrorist who murdered Pakistani politician Salman Taseer, a vocal critic of the country's blasphemy law.

In the new recording Ahmed says, "Anyone who disregards the respect and honour of Ghazi Mumtaz Qadri, he is the one who announces his enmity with Islam openly.

"Whoever calls the martyr an assassin, he is vicious, unclean and false."

In the recording the killer urges his followers to "eliminate all of the enemies of Islam and uplift the flag of Islam."

Ahmed said he killed Shah to defend the "honour" of Mohammed.

Shah's family said they were still being "traumatised" by the killer's actions. Their lawyer said that Ahmed "continues to taunt the family from inside a Scottish prison with calls supporting terrorism.

"If he has access to a phone and is able to get recordings to his supporters, that is surely something that could be easily stopped by the Scottish Prison Service. Can't they simply take his phone away?

"It is our understanding that anti-terror police have already been in touch with the prison service to try to put a stop to this. But these messages of hate are still being broadcast."