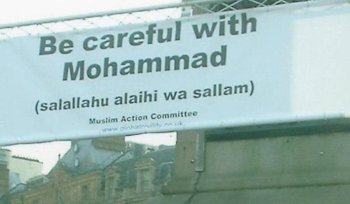 The Muslim Action Forum (MAF), which staged a protest outside Downing Street against Charlie Hebdo in February, has launched a "legal strategy" to stop insults against Mohammed.

The organisation is also asking supporters to "lobby your MP" to make "Islamophobia" a criminal offence.

They state that they intend "to launch a series of legal challenges in the English Court system" because "depictions of our Holy Prophet peace be upon Him is the worst kind of 'Hate Crime' that can be perpetrated on the 3 million Muslims in the UK and 1.7 billion Muslims worldwide."

The group says that they have "devised a legal strategy to prevent the continuous insulting and derogatory publications depicting and abusing the personality of our Holy Prophet Muhammad peace be upon Him."

In a press release published shortly after the demonstration in February 2015, the MAF set out details of their plan to outlaw depicting Mohammed in the UK, through "amendment of some existing legislation and the presentation of a Private Members Bill that promotes the idea of Global Civility."

They describe "Global Civility" as a "new direction" and argue that the "desecration" of "collective human dignity", through "insult, denigration or humiliation is morally and ethically wrong". Their website rails against "reckless and malicious expressions".

They urge the 100,000 Muslims who they claim signed their petition to lobby their MPs and all candidates standing in the General Election. The MAF makes a number of suggestions including three specific questions which they ask supporters to direct to their MPs.

The MAF suggests that petitioners ask their MPs if they think the "the Public Order Act 1986 should be amended to include under 'hate crime' any malicious depiction of images and use of malevolent language against revered personalities of all religions?"

They also suggest asking if "Islamophobia should be a culpable offence?"

The suggestions include a point inquiring if MPs would support a "Bill of Rights" that promotes "Global Civility", a concept which would prevent insulting religion.

The appeal says that if the MP answers no to any of the points above, their answer "will clarify to the local Muslim community where their political representatives stand on the single most important issue to every Muslim in this country and worldwide."

Stephen Evans, National Secular Society campaigns manager, said: "We trust all prospective MPs will appreciate that there is no homogeneous 'Muslim community' and reject such unreasonable demands to undermine everybody's fundamental rights and freedoms. Free speech is the bedrock of liberty and a free society – and integral to combating the spectre of Islamism. Now more than ever we need to preserve and strengthen freedom of expression, not capitulate to extremist demands."

The Muslim Action Forum (MAF) explain that their campaign against satirical depictions of Mohammed, and what they call "uncivilised expressionists", took its "first historical step by presenting a petition supported by over 100,000 signatures of Muslims promoting the concept of Global Civility and condemning the continuous publication of these insulting cartoons in France and other parts of the world."

The MAF website has a section devoted to the concept of "uncivilised expressionists", and they cite examples including the Satanic Verses, Danish newspaper Jyllands-Posten and the burning of the Quran. They define uncivilised expressions as a "a psychological disposition of the human mind which insults and maligns others without care or consideration of consequences." They call this "behaviour against Muslims".

The full press release on the Muslim Action Forum's legal strategy can be found here.