Ten years on from the abolition of blasphemy, free speech still needs defending 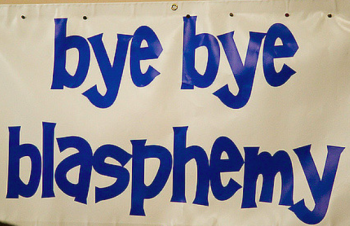 Marking ten years since the criminal offence of blasphemy was abolished in England and Wales, Stephen Evans argues that the freedom to speak critically about beliefs others hold sacred is far from assured.

This week marks the 10-year anniversary of the abolition of the criminal offences of blasphemy and blasphemous libel in England and Wales.

Their abolition in 2008 was the culmination of 140 years of NSS campaigning, in which time one of our own past presidents, George William Foote, served time in prison for publishing 'blasphemous' material in the Freethinker.

It was therefore fitting that the NSS played a prominent role in getting rid of the blasphemy laws – assisting our honorary associates in Parliament, Evan Harris and Lord Avebury, to draft the amendment to the Criminal Justice and Immigration Bill which eventually led to MPs voting to abolish blasphemy offences by 378 votes to 57.

To celebrate the abolition, the NSS threw a party at which Sir Ian McKellen drew a final line under the blasphemy laws by reading aloud The Love that Dares to Speak its Name. This poem by James Kirkup was the subject of the last prosecution for blasphemy in 1977 when Gay News published it, landing its editor Denis Lemon with a nine months in jail sentence, suspended.

Also among those celebrating at the event was Stewart Lee, the co-writer of Jerry Springer the Opera, which almost led to director general Mark Thompson facing blasphemy charges when the Christian Institute attempted to bring a private prosecution against the BBC for screening it. Stewart Lee's short film documenting his own battle against the religious fundamentalists that tried to silence his art is well worth a watch.

But even amongst the clinking of crystal at the NSS's 'Bye Bye Blasphemy' party, it was clear that the freedom to speak freely about beliefs or deities others hold sacred was far from won.

Ever since the Rushdie Affair in 1988, we've seen the emergence of a de facto blasphemy law, enforced by intimidation and the ever-present threat of violence.

The very same year as blasphemy laws were abolished, US book publisher Random House pulled the release of the novel The Jewel of Medina after receiving "cautionary advice" that its publication "might be offensive to some in the Muslim community, but also that it could incite acts of violence by a small, radical segment." After British publisher Gibson Square announced plans to publish the book in the UK, a petrol bomb was thrown through the door of the publisher's home, which doubled as the headquarters of his publishing company. After the arson attempt, release of the book was "indefinitely postponed" and to this day it has never been published in the UK.

A few years later, when the irreverent Jesus & Mo webcomic hit the headlines after members of a student group were ordered by their university to cover up their T shirts featuring drawings of Jesus and Mohammad, Channel 4 News chose to censor Mohammed from a Jesus & Mo cartoon saying it did not want to "cause offence to its audience".

One reason why it might not want to "cause offence" was illustrated the following year when two Islamist gunmen forced their way into the Paris headquarters of Charlie Hebdo, which regularly published Mohammed cartoons, and opened fire, killing twelve.

Later that same year, Bath Student Union and university chaplains blocked a sketch from a student comedy show with material on Mohammed and Jesus because it caused "great offence", while a Prophet Mohammed cartoon exhibition was cancelled in London after organisers were told by security services that there was a "very real possibility that people could be hurt or killed – before, during, and after the event".

Who needs blasphemy laws when you can create a climate in which people are intimidated into submission and silence by those who believe they have a right not to have their religious sensibilities offended?

Nevertheless, at the recent launch of the Equality Act Review, I was struck by how many of its backers appeared to be pushing for some sort of additional legislation to specifically protect Muslims from 'Islamophobia'. According to Naz Shah MP, "Islamophobia is growing at an unprecedented rate. We need to strengthen the equality act to ensure discrimination against Muslims is unlawful." This is puzzling, because the Equality Act already makes it unlawful to discriminate against or treat someone unfairly because of religion or belief, or their lack of religion or belief. Hate crime laws also outlaw incitement to or acts of violence or hostility directed at people because of who they are or are perceived to be. So what new additional protections for Muslims are these campaigners seeking?

This is all too reminiscent of concerted efforts at the United Nations from Islamic nations to introduce 'defamation of religion' resolutions, to prohibit expressions that would "fuel discrimination, extremism and misperception leading to polarization and fragmentation with dangerous unintended and unforeseen consequences".

The Organization of the Islamic Conference (OIC), now known as the Organisation of Islamic Cooperation, first introduced its first UN resolution on Defamation of Islam in 1999, prompted by what was perceived by the organisation to be an increase in discrimination against Muslims.

Human rights organisations, including the National Secular Society, have consistently argued that if accepted, these resolutions would amount to an international blasphemy law. Eventually, the UN Human Rights Committee made it clear that "Prohibitions of displays of lack of respect for a religion or other belief system, including blasphemy laws, are incompatible with the International Covenant on Civil and Political Rights." Let's hope the people of Ireland show a similar commitment to free speech in their forthcoming referendum on removing blasphemy as an offence from its constitution.

But it's not just about changing laws. It's about changing attitudes. Deference to religion, either though reverence, fear, or misplaced cultural sensitivity, creates a climate where certain ideas, actions or people cannot be criticised. This is dangerous. The fear of being accused of 'Islamophobia', akin to a charge of racism in many minds, was a contributory factor to no action being taken over the mass rapes of young girls in Rotherham. Deference to clerics has undoubtedly played a part in decades of child abuse going unchecked within the Anglican and Catholic churches.

Religious restrictions on freedom of expression, whether by the state or self-imposed, are also dangerous in that they corrode democracy. Free expression is the fundamental human right that underpins all civil liberties.

No one has the right not to be offended. Yet since the abolition of the blasphemy laws in England and Wales, we've seen countless attempts to suppress free expression on the grounds of blasphemy or offensiveness. Too often these attempts have been supported by so-called 'liberals'. Blasphemy laws or no blasphemy laws, we can't afford to be complacent. If you've got something critical to say about religion, someone somewhere wants to shut you up. Islamic extremism and the rise of the anti-Muslim far-right in Britain are providing new justifications for censorship. This must not be countenanced. Debate and challenge should always be the first recourse in the face of extreme or objectionable views. Ten years on from the abolition of blasphemy laws, the right to offend still needs defending.