Censorship on Channel 4 News: an open letter to the editor 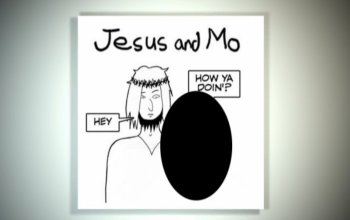 The National Secular Society has written to the editor of Channel 4 News to express its concern over a decision to censor a cartoon depiction of the Prophet Mohammad during its broadcast on Tuesday 28 January.

The letter reads as follows:

We are writing in response to a package presented by news correspondent Katie Razzall, on Tuesday 28 January 2014, which looked at the controversy surrounding Liberal Democrat parliamentary candidate, Maajid Nawaz, and his recent tweeting of a Jesus & Mo cartoon.

We were surprised and extremely disappointed to see that Channel 4 News took the decision to cover up the image of Mohammed when showing the Jesus & Mo cartoon, and we are thus keen to elicit the rationale behind that particular editorial decision.

During the report, it was noted that this decision was taken so as not to cause offence to some viewers; however we would like to point out that by your making this decision you have effectively taken a side in a debate where a Muslim man has suffered violent death threats after he explicitly said he did not find the cartoons offensive. You have taken the side of the reactionaries - the side of people who bully and violently threaten Muslims, such as Mr Nawaz, online.

By redacting the picture of 'Mo', you have contributed to a climate of censorship brought on by the unreasonable and reactionary views of some religious extremists. Rather than defending free expression, one of the most precious pillars of our liberal democratic society, you have chosen instead to listen to extremists and patronise British Muslims by assuming they will take offence at an irreverent and satirical cartoon. By taking the decision you did, not only did you betray the fundamental journalistic principle of free speech, but you have become complicit in a trend that seeks to insidiously stereotype all Muslim people as reacting in one uniform way (generally presented as overly sensitive and potentially violent).

Given that your editorial decision seems to be have been weighted by a concern with offence, we might also note that you ended up with a report that was, in fact, very offensive to many; offensive to those who take seriously and cherish our basic freedom to speak and question, and offensive to many Muslims, whose voices you do not hear because you insist on placating the reactionary voices of people claiming to represent what it is to be an 'authentic Muslim'.

In the subsequent interview with Mohammed Shafiq of the Ramadhan Foundation, presenter Jon Snow made the point that there are a number of places in the world where blasphemy is punished by death. This reality provides an apposite backdrop to the whole debate and, by extension, Channel 4's decision to censor. In a world where the notion of offence to those with religious views is being used to control and punish people of all religions and none, the UK has an urgent responsibility to uphold freedom of expression in the face of religious extremism. Its news outlets share in this responsibility.

Whilst we understand that you covered both sides of the issue through your report and subsequent interview, we were keen to highlight the dangerous precedent you have set by taking the editorial decision to censor the Jesus & Mo cartoon, and the deeply symbolic implications that decision has. We look forward to hearing your thoughts on the matter.

We are considering this an open letter.