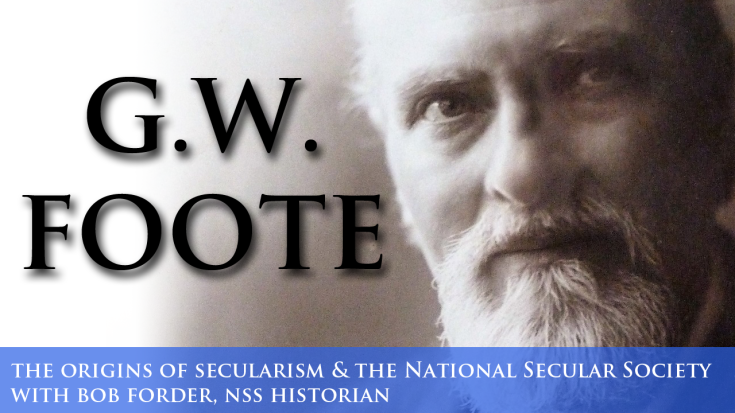 George William Foote was born on 11 January 1850 in Plymouth. He was brought up in poor circumstances, as his father died when he was young. But he had a good education by the standards of the time which stimulated an interest in literature. He was brought up an Anglican but by the age of 15 was drawn to unitarianism.

In 1868 he moved to London, first working as a librarian. He soon encountered secularists and became active in the cause. He was mainly drawn to George Jacob Holyoake who offered a more moderate version of secularism than that of Charles Bradlaugh. This became sharply apparent in 1876, when Foote was expelled from the NSS, and in 1877 when he was one of Bradlaugh's most vocal critics over the republication of The Fruits of Philosophy. 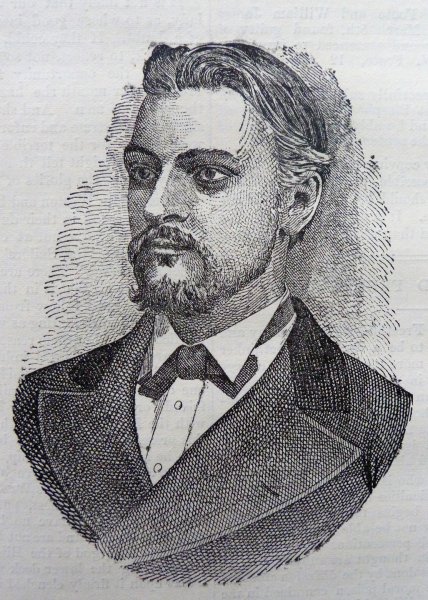 This changed in 1880 when Bradlaugh was prevented from taking his rightful place in the House of Commons. Up to then Foote had favoured a quiet scholarly life but Bradlaugh's treatment enraged him. His solution was to fight fire with fire.

In 1881 Foote rejoined the NSS and in May issued the first number of his new newspaper The Freethinker. He set out his stall in the first issue:

"The Freethinker is an anti-Christian organ, and must therefore be chiefly aggressive. It will wage relentless war against Superstition in general, and against Christian Superstition in particular".

He was as good as his word and his primary weapons were parody and satire. From an early stage he introduced a weekly Bible cartoon which was particularly hard-hitting and incensed the religious. Such tactics seemed popular because although The Freethinker was launched as a monthly it was soon being printed each week.

Two blasphemy prosecutions were brought, against the issues of 28 May 1882 (in which a cartoon of The Martyrdom of St. Labre and had proved particularly controversial) and the special Christmas number that year. The latter came to trial first in March 1883. Foote, as editor, was accompanied in the dock by William Ramsay (shop manager) and William Kemp (printer). They appeared before Lord Justice Sir Ford North, whose attitude towards the defendants was hostile throughout. Despite the judge's advice to the jury, they failed to convict and a retrial was ordered for the following week. 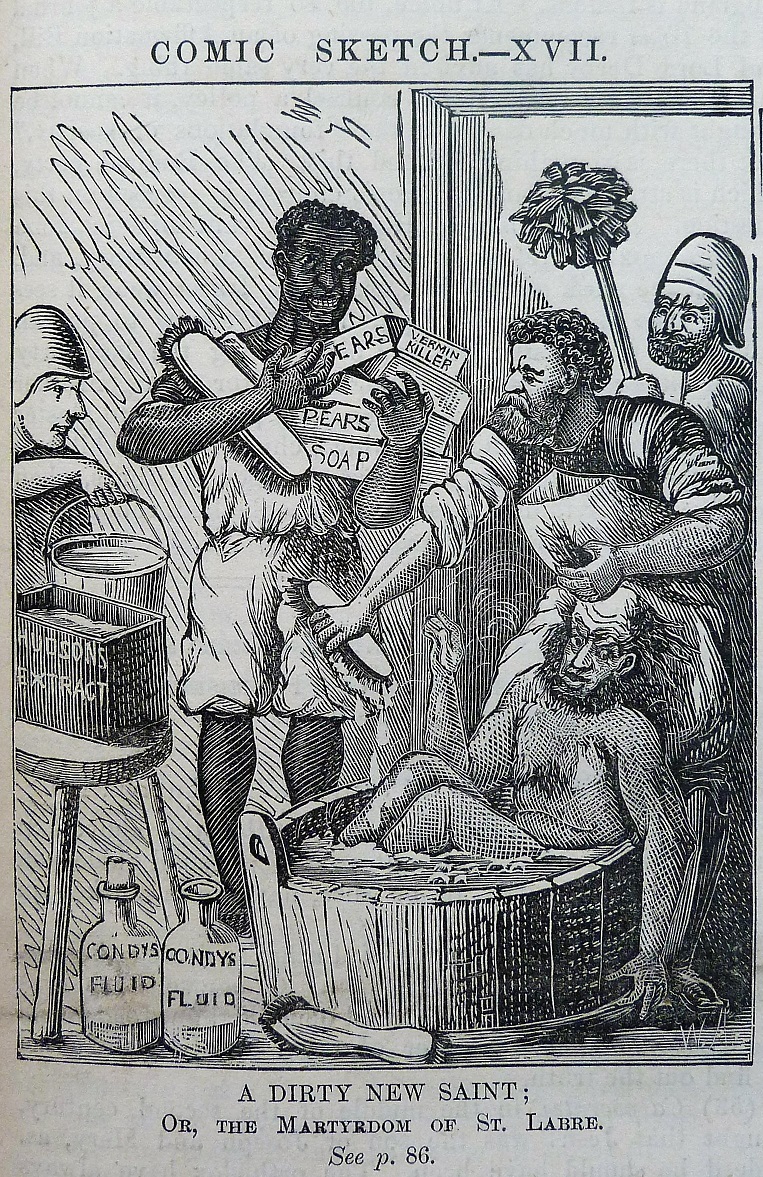 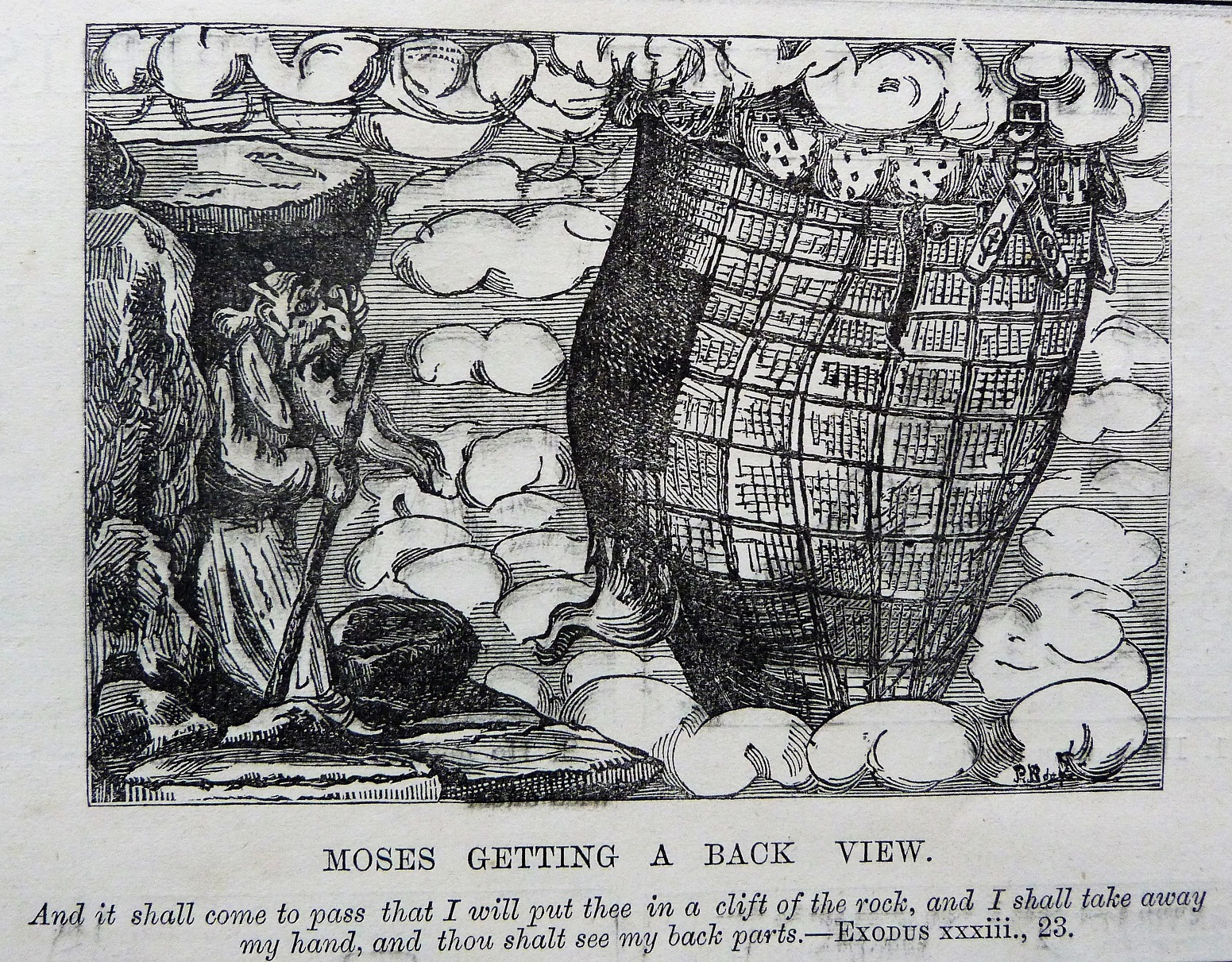 The second trial was again held before North and this time the jury convicted. Foote was sentenced to 12 months, Ramsey nine and Kemp three. The severity of the sentence came as a shock even to Foote's opponents. Foote's response has become famous: "My Lord, I thank you, it is worthy of your creed". He had become a martyr. 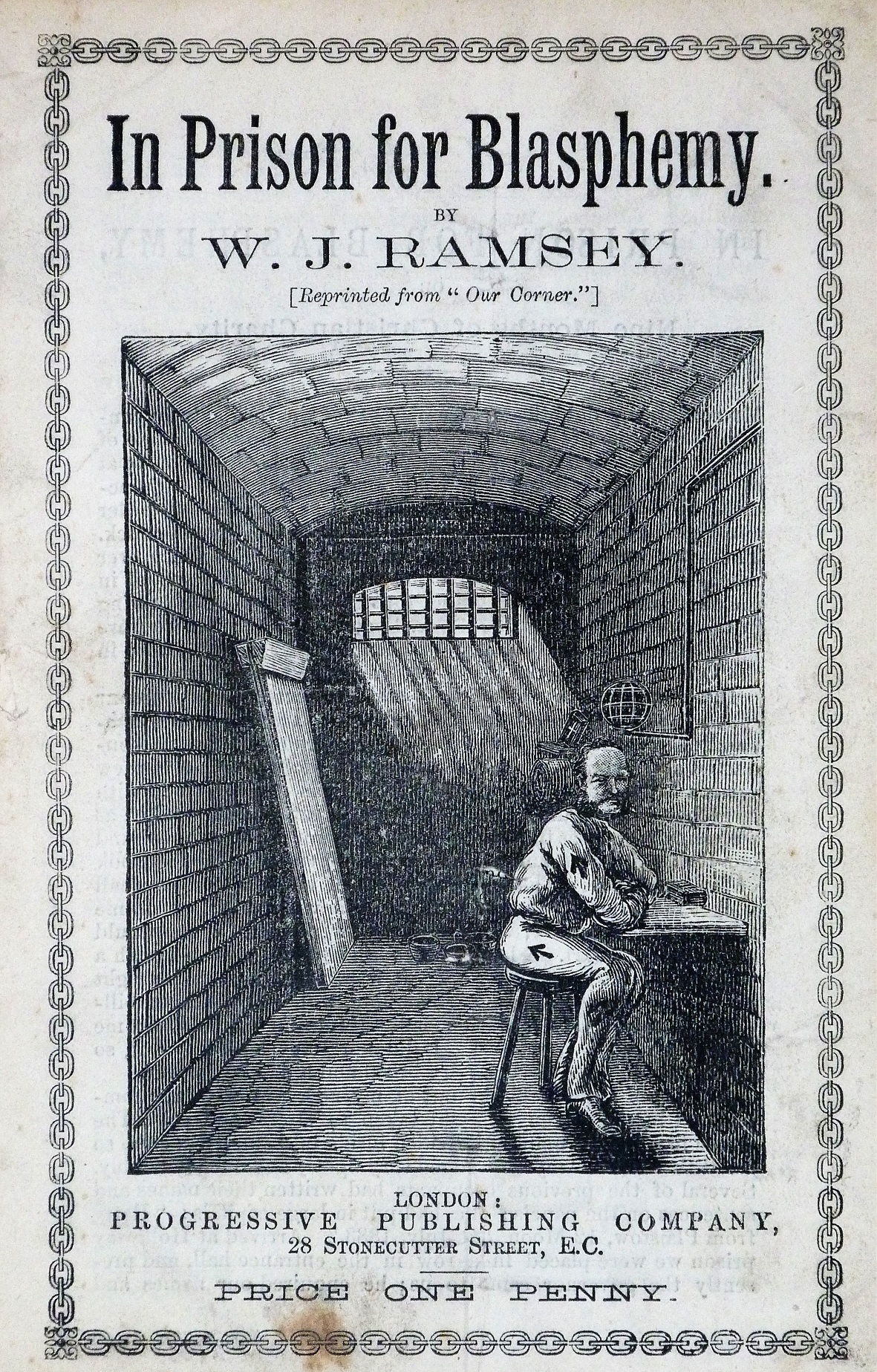 Foote and Ramsey were back in court for a third trial in April on the first charge relating to The Freethinker of 28 May 1882. This time the case was heard by Lord Justice Coleridge who, in contrast to North, treated the defendants with consideration and courtesy. The jury failed to reach a decision and although a retrial was expected it never occurred. The prosecution mysteriously dropped the case.

Foote conducted his own defence throughout the trials. One of his main arguments was that his crime had been to peddle blasphemy cheaply to working people while polite agnostics and sceptics (such as T.H. Huxley and Aubrey Beardsley) were left to carry on undisturbed.

Foote, Ramsey and Kemp served their sentences at Holloway under the severe regime of a Victorian gaol. Foote was now a national figure; he received a hero's welcome on his release. When Bradlaugh stepped down as President of the NSS in 1890, Foote was his obvious successor.

He took over at a difficult time, as the NSS faced significant challenges. Progressive opinion was switching from radicalism to socialism. And opportunities for popular, heroic struggles had declined – partly because the secularists had been successful. The NSS lost some of its leading characters after Bradlaugh's death but Foote managed to hold it together.

He also saw the organisation change from being an essentially political movement into a pressure group. Under his presidency The Freethinker emerged as the mouthpiece of the NSS. Foote's weekly editorial was usually interesting, provocative and written with style and panache. During his lifetime he signed his name to over 2,000 articles. He also gave the NSS financial security by forming the Secular Society Ltd, which took advantage of Lord Justice Coleridge's judgement of 1883 legalising bequests for free thought.

When Foote's health broke down in 1913 Chapmen Cohen took over the editorship of The Freethinker in everything but name. Foote died on 17 October 1915, amid a war that seemed to defy secularists' faith in human progress. 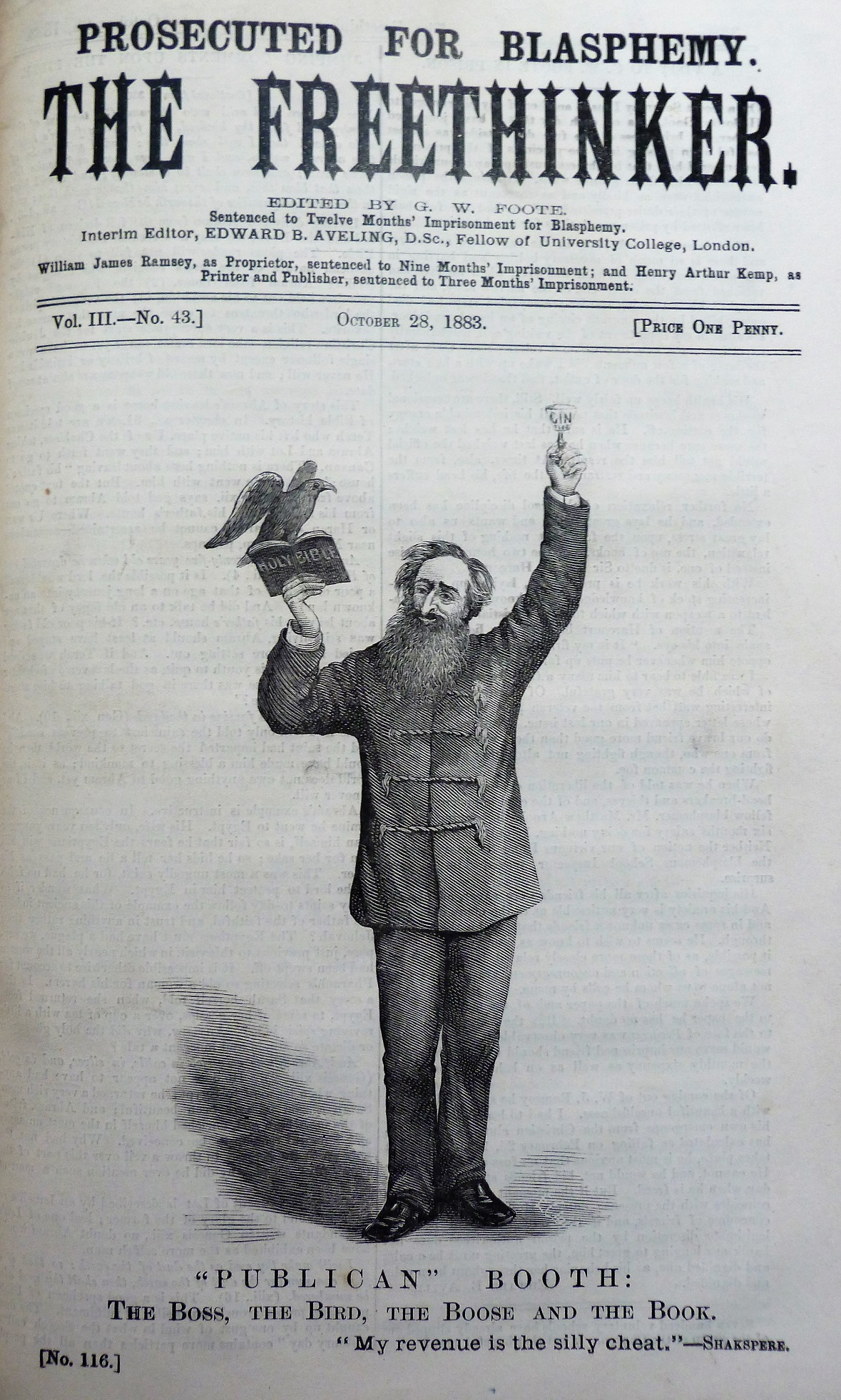 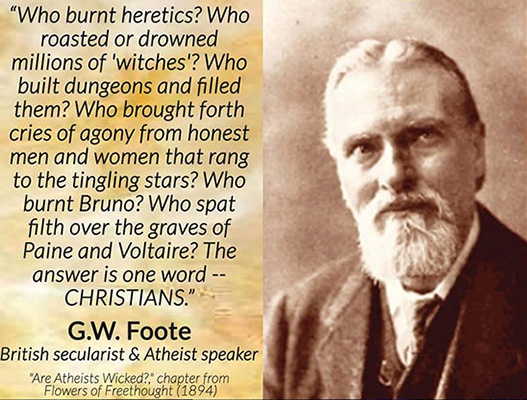