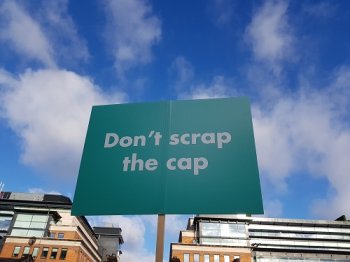 The Government is preparing to extend religious selection in faith schools. Keith Sharpe contrasts its willingness to cause greater segregation with French efforts to encourage integration in the wake of terror attacks.

For secularists interested in education 2018 has not got off to a good start. The prime minister's somewhat shambolic Cabinet reshuffle included the appointment of Damian Hinds as Education Secretary. In 2014 as a backbench MP he spoke out against the 50% cap on religious selection in new faith schools. It has turned out to be a good career move. In the 2017 election Theresa May made a pledge that she would axe the 50% cap so faith schools could select 100% of pupils on the basis of faith.

Theresa May believes faith schools are better schools and wants more of them. Some faith groups claimed a 50% cap on discrimination was holding them back from opening new schools and so the PM was keen to get rid of it. But the previous education secretary, Justine Greening, was less enthusiastic, and this was undoubtedly a factor in her being sacked. Theresa May has spoken particularly approvingly of Catholic schools, and now she has a Catholic education secretary who is only too keen to do her bidding. The Catholic Church has long lobbied for an end to the 50% cap and it must overjoyed with Hinds's appointment. It is interesting also to note that he listed in the registry of members' interests a donation of over £5,000 by the Catholic Church to provide a parliamentary intern for him in 2014.

Hinds argues that scrapping the limit on faith-based admissions will allow faith schools to preserve their "specialness" over time and prevent dilution by other faith demographics. His concern was principally with Catholic schools but the scrapping of the cap will apply to all faith schools and could lead to even more Muslim-only and Jewish-only schools.

Only a month ago the Head of Ofsted, Amanda Spielman, issued a stark warning about faith schools promoting segregation rather than integration. In particular she drew attention to a growing number of highly conservative faith schools which work to actively undermine fundamental British values. Inspectors found that 58% of 160 independent Islamic schools visited are either inadequate or require improvement. For independent Jewish schools the figure is approximately 50%, and approximately a third of independent Christian schools are in the same category.

After the terror attacks of 2017 the British Government might have been reasonably expected to promote integration rather than segregation. On the other side of the Channel this is precisely what the French Government did in 2015 after the Charlie Hebdo attack in January of that year. France has had a long tradition of secular education, and the response of Francois Hollande's cabinet was to beef up the provision of 'Enseignement Moral et Civique' in all state schools. From September 2015 all pupils between the ages of 6 and 16 would receive 300 hours of nationally determined civic teaching during their schooling. This was designed to instil the cultural values of liberty, equality and fraternity as well as a detailed understanding of the rights and responsibilities of citizens. Najat Vallaud Belkacem, the Moroccan-born minister for women's rights at the time, said:

"We have to reappropriate the concept of laïcité, so we can explain to our young pupils that whatever their faith, they belong to this idea and they're not excluded. Secularism is not something against them; it protects them...Laïcité is about saying we're a country where individuals can have whatever beliefs, or lack of beliefs, they choose and the public powers must be neutral towards them."

What a difference 21 miles of Channel seawater can make in social policy. On this side the removal of the 50% cap and the expansion of faith schools are seriously retrograde steps which will further divide the country, and at a time when more than ever we need children of all faiths and none to be educated together in inclusive schools. We could learn a useful lesson or two from our nearest neighbours on the continent.