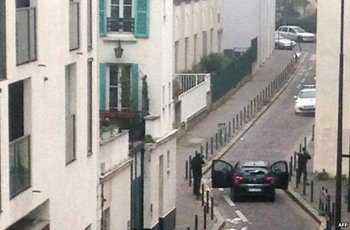 Three masked gunmen have stormed the offices of the Charlie Hebdo satirical magazine, leaving 12 dead. 5 others suffered critical injuries, according to current reports.

Eyewitnesses saw two gunmen shout "the prophet has been avenged" as they escaped the scene of the attack in cars. Footage of the street outside showed the shooters still firing their weapons and shouting "Allahu Akbar" as they appeared to flee the scene.

The attack took place as the magazine was preparing an issue on sharia law, during an editorial meeting which saw all journalists present at the Charlie Hebdo office.

This is the deadliest terror attack in Europe for several years, and comes after several "lone-wolf" style attacks in France over recent months, in which Islamists shouted "Allahu Akbar" and drove cars into pedestrians and used knives to target police and civilians. In December 2014, France was victim to three attacks in three days.

The terror threat alert in Paris has now been raised to the highest possible level.

President Hollande described the attack as "an exceptional act of barbarism committed against a newspaper."

President Hollande added that France "will fight these threats and we will punish the attackers."

The magazine is known for its irreverent take on current affairs, and was the victim of a previous Islamist attack- when the Charlie Hebdo offices were firebombed in 2011, after it published an issue which was "guest edited" by the Muslim Prophet Mohammed.

The last tweet sent from the Charlie Hebdo account was a satirical picture of Islamic State leader Abu Bakr al-Baghdadi.

Two brothers and another man have been identified as suspects in the attack.

The men have been named as French nationals Said Kouachi and Cherif Kouachi, in their early 30s, along with 18-year-old Hamyd Mourad. His nationality is unknown.

This story will be updated as new information is released.