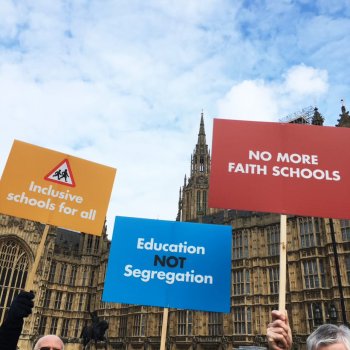 The education section of the government's Integrated Communities Action Plan opens with the sort of strong rhetoric that secularists have welcomed before:

"Educational settings should prepare all children, young people and adults to participate fully in life in modern Britain. They should be inclusive environments which enable students to mix and build positive relations with those from different backgrounds, and equip learners with the skills, knowledge and values to become active citizens."

Many of the policy suggestions echo concerns and recommendations the National Secular Society has been raising for years. Not least among them is a commitment for new powers to tackle unregistered faith schools.

The NSS has been on the forefront of challenging abuses within the independent registered (legal) and unregistered (illegal) faith school sectors. Our research has helped expose the extent of unregistered schools, which aren't held accountable to any standards for children's education or welfare. Last year saw the first conviction for the proprietors of an unregistered school, but our research has shown that local authorities do not feel supported and aren't making use of their powers to tackle illegal schools. Strong central leadership is necessary, and Ofsted must have the powers to investigate known sites.

Organisations providing full time education during the school day are already required to register. If the government feels there is a need for greater legal clarity on this duty and who it covers, then we welcome that consideration.

Time and again the NSS has reported on and exposed insular education at independent faith schools which seeks to deny pupils information and to mould them into narrow religious roles. We've helped drive improvements in the independent school standards, which strike the right balance between independent schools' autonomy and young people's rights to education and safety. The action plan commits the government to "publish advice on the independent school standards, so that schools know what is expected of them; and a policy about the circumstances in which government would move to enforcement action". Hopefully this will put an end to the travesty of inadequate independent faith schools failing for years to make any meaningful improvements.

The government's work on the Integrated Communities Strategy heralded the major victory last year – won by the NSS and others – of the government's U-turn on proposals to allow new faith academies to practice 100% religious selection. As I said at the time of the Integrated Communities green paper, we can't build a shared society around segregated schools. But the action plan seeks to work around, rather than address, the harms of faith schools. Creating links between different school types might be welcomed, but it is no substitute for educating children together.

The action plan claims the government "have strengthened expectations for new free schools on promoting integration". But in the case of faith schools this often amounts to mere platitudes. Schools intended to promote specific religious worldviews, and to exclude pupils who don't share their faith, have been allowed to open as long as they aren't actively promoting extremism.

For too long conversations about schools have focused on a narrow conception of individual choice, rather than shared values and the type of education all young people should be entitled to. Integrated communities require a deep commitment to integrated and inclusive schools.

Rolling back discriminatory faith based admissions would not only have a direct impact on improving integration, it would provide a unique opportunity for the experimentation this strategy imagines. The proposed 'Integration Areas' could use admissions to bring children from different backgrounds together, rather than segregating them.

On elective home education the government has listened to our concerns and will produce guidance. But the failure to instigate a registration scheme means children will continue to fall through the gaps. Respecting the rights and autonomies of families who home educate has to be balanced against ensuring all young people have access to a suitable education that respects their independent rights.

Around 250,000 children are thought to be attending up to 5,000 religious supplementary schools in England and despite serious safeguarding concerns, no system for registering and inspecting such schools exists.

The government seems undecided and confused about how best to address this, and has been too willing to back off in the face of scaremongering or unreasonable demands from faith groups. However, everyone recognises this is an area where proportionality and nuance is needed.

In the action plan, funding of £3m will allow 16 local authorities to explore best practice. The Department for Education will also be supporting guidance for parents in pilot areas and will bring forward a voluntary safeguarding code of practice.

We've long supported requirements for schools to prepare pupils with the values necessary for active, informed citizenship in modern Britain: democracy, the rule of law, individual liberty, mutual respect and tolerance of those with different faiths and beliefs. It's good to see that this will be a focus in the new Ofsted inspection handbook due for consultation this year. But the DfE must support schools and teachers facing organised bullying and undue pressure for seeking to promote equality, respect and tolerance.

There's much to welcome in this action plan. The NSS will be working to hold the government to account for these promises and to push it to be braver.