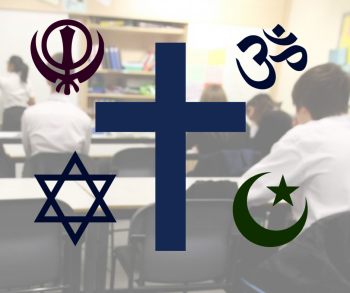 Necessary reforms of religious education are being frustrated by religion's lingering influence. It's time to liberate RE from the vested interests, argues Stephen Evans.

Religious education in England faces "a perilous future" unless it is subject to "strategic, urgent intervention". That was the stark warning of a recent interim report from the Commission on Religious Education, which has been set up to consider the subject's future.

Some may argue that the subject shouldn't have a future. The whole point of RE originally was to inculcate Christian dogma. Few people today think it is the job of the state to teach every child their catechism, even though this is exactly what many faith schools continue to do. But away from faith schools, RE is a subject in search of a rationale and there is no consensus about what that should be, because the very reason for having it in all schools' curricula has now disappeared.

That said, religion remains highly relevant to people's lives. Britain is becoming increasingly apathetic to religion, but at the same time the country is becoming increasingly religiously diverse. Culture wars, religious fundamentalism and the horror that trails in its wake often dominate the news. Religion looks set to be a cultural and political phenomenon well into the future.

Surely then, there is real value in giving pupils the tools they'll need to navigate the religion and belief landscape they inhabit and a basic understanding of the diversity of religious and non-religious worldviews they will encounter.

The traditional model of RE, which carries so much confessional baggage, clearly isn't the ideal means of achieving that. A plethora of reports have reached this same conclusion. Why then, is reforming RE so politically difficult? To answer that, it's worth considering the vested interests involved.

The churches have always regarded RE as their domain. The deal struck between church and state in 1944, which resulted in state funding for church schools and compulsory worship for all, also saw the introduction of compulsory religious instruction. Religious Instruction was to be provided to all pupils on a non-denominational basis except in religious schools, which were allowed to undertake faith-based teaching.

Since then RI has evolved into RE and a more pluralistic approach has developed. Christianity still dominates, but community and voluntary controlled faith schools are now required to teach a broader and more balanced curriculum. Schools with a religious character are still permitted, indeed required, to teach RE in accordance with the tenets of their faith – a situation that fundamentally undermines RE's credibility.

But the Church of England and the Catholic Education Service, which between them run the lion's share of England's faith schools, are unlikely to willingly surrender their control of the subject. Church House, the CofE's political headquarters situated on Great Smith Street in London, is almost directly opposite the Department for Education – and one can't help thinking they have the kind of close relationship next door neighbours often enjoy.

This damages RE, because in an education system in which a third of all schools are faith-based, one wonders if the teaching of religion can ever be carried out without bias and partiality. But religion's domination of the subject doesn't begin and end with faith schools.

The syllabuses used in most schools (excluding schools of a religious character) are determined locally by committees known as SACREs, which give 50% of the representation to religious groups. As Mark Chater, the director of Culham St Gabriel's, rightly observes, "this level of control by religious groups, whose raison d'être is their own representation in a positive light, is educationally inappropriate."

But then consider that many of the locally agreed syllabuses are actually being written by an organisation called RE Today Services, which is wholly owned by the Christian Education Movement. Christian Education is the charity behind the International Bible Reading Association and also facilitates the Montgomery Trust, which provides expert speakers in Christian apologetics. It is also part of the Consultative Group on Ministry among Children. Hardly an impartial party, then.

Christian Education/RE Today has recently received just short of £200,000 to develop the Church of England's 'Christianity Project' – a "significant resource" (read alt. curriculum) for use in RE. This is the Church of England's attempt to ensure Christianity is taught on its terms. It aims to develop "theological thinking" amongst pupils as part of its drive to ensure "every child has a life enhancing encounter with the Christian faith and the person of Jesus Christ". The project has now been rebranded 'Understanding Christianity' because, as Derek Holloway of the CofE's education office explained, "it was felt this sounded more educational and less like an evangelism course"– which of course is what it is.

The Christian Education Movement, and its trading arm RE Today, do make clear their commitment to an "ecumenical, multi-faith approach" to RE, including the inclusion of non-religious worldviews. But given that it is run by representatives from church denominations, its agenda will naturally reflect the priorities of the Christians behind it.

The Christian Education Movement also funds NATRE, subject teacher association for RE professionals. This was the organisation that made headlines earlier this year by reporting that up to a quarter of secondary schools were breaking the law by failing to teach religious education. Its recommendations, which stressed the need to enforce the law, had more than a hint of self-interest about them. The emphasis shouldn't be on enforcing a rotten law, it should be on rethinking it – along with our whole approach to the teaching of religion in schools.

One possible agent of change should be the All Party Parliamentary Group for RE which exists to promote "high standards of religious education". No luck there though, as this group was subject to 'religious takeover' in 2015 by the fundamentalist Christian wing of the Conservative parliamentary party. It is now chaired by evangelical Christian Fiona Bruce, ably assisted by Labour's pro-lifer Catholic and anti-same sex marriage activist Mary Glindon and Lord Singh of Wimbledon, the director of the Network of Sikh Organisations (UK) and Thought for the Day regular. This group is unlikely to take RE in the direction it needs to travel.

The subject's archaic legal framework and its loss of status in schools has led to RE becoming an unprincipled business exploited by religious enthusiasts of all stripes. It's all a bit of a religious stitch-up. And as so often the case with interfaith initiatives, the beliefs, values and ethical outlooks of the religiously unconcerned ­(the majority) are almost entirely ignored. Only by playing religion at its own game has Humanism wriggled its way onto some syllabuses. The inclusion of a non-religious worldview ­– albeit one few identify with – is a positive development, but amounts to little more than crumbs from the table. The whole subject area needs to be wrestled away from religious control.

One possible vehicle for reform is the Commission on Religious Education. Its recent interim report echoed many of the concerns secularists have been expressing for years. But one major concern is that the Commission's starting point appears to be that religious education must be a distinct subject in the curriculum. Why is the Commission accepting the status quo uncritically, and then trying to fix it with a sort of 'patch and mend' strategy? The answer to that may lie in the fact that the Commission was set up by the RE Council, which will naturally want to defend its territory.

RE teachers tend to be some of the most passionate advocates for their subject area. Many are doing a great job under difficult circumstances. But if this area of study is going to survive, its practitioners need to recognise the religious privilege that has sustained it thus far, and acknowledge why this is no longer appropriate in 21st-century education system.

The Commission on Religious Education's current consultation on the interim report is an opportunity to inject some fresh thinking into this and encourage the Commissioners to think outside the religious box. But for that to happen it needs to hear from as wide a range of people as possible, not just the usual vested interests.

The National Secular Society will therefore be recommending the following:

Everyone will have their own idea about how religion and belief should be approached by schools. Why not let the Commission know yours?

The Commission on Religious Education's consultation on the interim report will be open until 9.00am on 4th December. It is important that the Commission hear from as wide a range of people and organisations as possible.