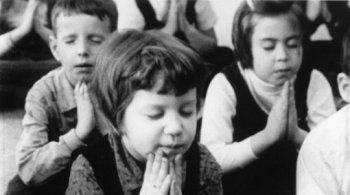 Collective worship has its history in a murky compromise between politicians and the church dating back to the Second World War – and it is long since time the arcane requirement was removed, writes Ed Moore.

There is a growing consensus among educators, parents and academics that Collective Worship in schools should be abolished.

The debate was opened up again recently with the Wolf Institute's "Report of the Commission on Religion and Belief in British Public Life" which clearly came out against, calling for the legal requirement for schools to hold acts of collective worship to be repealed.

But how many people know why we ever came to have this law in the first place?

The first law introducing mandatory collective worship was the famous 1944 Education Act, introduced by President of the Board of Education Rab Butler and receiving Royal Assent on 3 August 1944. This Act, passed while the Second World War was still being fought, was the largest piece of 'home' legislation brought forward by the Coalition Government. The Act specifies that "the school day in every county school and in every voluntary school shall begin with collective worship on the part of all pupils in attendance at the school".

"The arrangements made therefor shall provide for a single act of worship attended by all such pupils," it adds.

School Worship was now mandatory, but this provision wasn't the most important part of the Act. Religious Education covered only 6 of the 120 clauses; the rest contained the real meat, a complete overhaul of the education system. Among the radical measures introduced were free education for all, an increase in the school leaving age to fifteen (and later sixteen), the tripartite system of grammar, secondary modern and technical schools, and the 11-plus exam which directed children from primary to secondary education. As David Bell, the Chief Inspector of schools said in 2004, "As history has since shown, the act profoundly influenced the education system for decades to come."

While it could be considered strange that such a landmark piece of legislation should appear in wartime in fact it may be the case that it could only have appeared in such circumstances. The wartime Coalition Government meant party politics had been put aside. The mixing of the classes had broken down the rigid social order and mass evacuations of children to the countryside had revealed the shocking deprivation in the cities. These circumstances did not produce only the desire to change education, they produced the resolve to overcome the entrenched interests holding back progress; the churches.

No bill is ever brought to parliament without years of preparation and the 1944 Education Act was no exception. The work started in November 1940 in Bournemouth to where the civil servants of the Board of Education had been evacuated. Pressure had been growing to resolve the problems of education in the country and this was an opportunity to work through the issues away from the pressures of London. In their deliberations the pattern of future secondary education was quickly established – raising of the leaving age to 16, free schooling, moving to secondary education at 11 but an intractable problem to overcome remained: How to deal with the church schools?

At the outbreak of war the school system was made up of 10,363 council schools with 3,151,000 pupils and 10,533 'voluntary' church schools educating 1,374,000 pupils. This Dual System of schooling gave rise to endless complications in administration that had to be managed within the broad scheme of reform. Local Education Authorities had to pay for the 'fair wear and tear' of voluntary schools yet the managers of these schools had to pay for alterations and improvements which they were frequently unable to afford. Most voluntary schools were in old buildings, few had adequate support from church collections and even fewer could afford modern standards of ventilation and hygiene. An earlier education review had required children of eleven and over to be in dedicated Senior Schools or departments yet while 62% of Council School pupils had been reorganised only 16% had in voluntary schools. What was to be done to enable reconstruction? Perhaps the churches themselves had constructive suggestions?

On the 12 February 1941 a statement on improving education did indeed come, jointly, from the Archbishops of Canterbury, York and Wales. The 'Five Points' letter to The Times recommended … more religion.

"There is an ever-deepening conviction that in this present struggle we are fighting to preserve those elements in human civilization and in our own national tradition which owe their origin to Christian faith. Yet we find on every side profound ignorance of the Christian faith itself," the Archbishops argued at the time.

"We urge that in all schools the timetable should be so arranged as to provide for an act of worship on the part of the whole school at the beginning of the school day".

No mention was made of the difficulties in paying for school improvements, or how to reorganise the dual system. What did the committee of the Board of Education make of this? When their recommendations, in "Education After the War", were finally published on 13 May 1941, in what became known as the Green Book, it said among the 141 clauses: "At the present time in provided schools, while it is the almost universal practice to have undenominational religious observance and instruction, such instruction is required neither by statute nor by regulation."

The Green Book argued that, "There is a growing volume of opinion that the time has come when the place of religion as an essential element in education should be specifically recognised. It is accordingly suggested that there should be religious observance and instruction enjoined by statute in all provided Primary and Secondary Schools."

This document thus became the first official government record proposing legislation on collective worship in schools. Why was it there? For the answer we go back to file ED 138/22 in the National Archives. The file contains several papers explaining how the Green Book was decided on and in the paper "The Green Book and the Problem of the Dual System and Religious Instruction in Schools" we find:

"Thus, the Green Book proposed to meet as far as possible, the extended claim of the Churches in the matter of religious instruction in schools as expressed in the Archbishop's letter of February 12, 1941, and in return for this and extended financial assistance to non-provided schools to secure extended public control over non-provided schools."

Collective Worship would become a legal requirement in all supported schools. In exchange the Government would gain the control needed over church schools to carry out the desperately needed reforms.

Was this the final settlement? Of course not. The appointment of Rab Butler as the President of the Board of Education on 29 July 1941 started the process of negotiation and it continued through the White Paper "Educational Reconstruction" published on 16 July 1943 right up until the law was passed. Against the Government were the Church of England, the Nonconformists and the Roman Catholics, sometimes combined and sometimes fighting their own corners. Yet in the end a compromise was reached and the law passed.

How did the politicians behind the bill view the church leaders during this process? The last word goes to Winston Churchill, as recorded by James Chuter Ede, the Board of Education Parliamentary Secretary, in his diary on Tuesday 13 July 1943: "The P.M. said that if there was trouble over the religious settlement he would be in favour of telling the House exactly what the malcontents were getting out of the scheme, and then leave the decision to the free vote of the House on the understanding that if the scheme were defeated this, the most generous example of religious toleration in the history of the world, would be destroyed & the great measure of educational advance with it!"

So should we call Collective Worship a bribe? We have a legal requirement today only because the churches exchanged total control over education in their own schools for more religious influence in all schools.

Time for it to go.