The Catholic War on Democracy 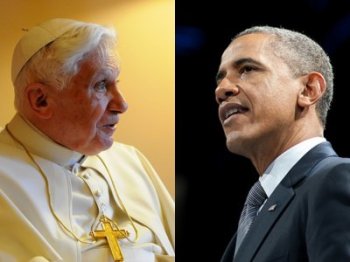 At a Vatican meeting with Catholic bishops from the USA last month, the Pope told them that they had a duty to apply pressure on Catholic politicians to get Catholic doctrine written into law.

Ratzinger said: "The Church has a critical role to play in countering cultural currents which, on the basis of an extreme individualism, seek to promote notions of freedom detached from moral truth."

He noted US bishops' efforts "to maintain contacts with Catholics involved in political life and to help them understand their personal responsibility to offer public witness to their faith...". That was especially important with regard to "the great moral issues of our time: respect for God's gift of life, the protection of human dignity and the promotion of authentic human rights," he said.

The bishops had to ensure that American Catholics had the courage "to counter a reductive secularism which would delegitimize the Church's participation in public debate about the issues which are determining the future of American society."

No sooner were they back home than the bishops saw an opportunity to put the Pope's orders into effect. They launched an all-out attack on President Obama's new health insurance plan that would make it possible for women to gain contraception free of charge. Even in Catholic institutions.

The great wail went up: "Obama has launched a war on religion!"

This cry was taken up by the right-wing press and was, of course, a gift to the Republican politicians battling it out for the presidential candidacy. Mitt Romney said: "Remarkably, under this president's administration, there is an assault on religion - an assault on the conviction and religious beliefs of members of our society." Gingrich and Santorum – both Catholics – have similarly launched broadsides at the President.

In their usual overstated, hyperventilating way the bishops have presented President Obama as variously destroying religious freedom, breaching the constitution, attacking the Catholic Church and maybe even eating the babies he permits to be aborted.

The Catholic Church started its campaign at screeching pitch and is increasing the volume from there.

So, is there a war on religion? Or is religion waging a war on democracy?

After all, Obama was elected on the promise of health care reform. He didn't pull it out of the bag as a surprise. The American people wanted him to do it.

And polls are now showing that most American Catholics – and everyone else except white evangelicals - support Obama's plans to give women birth control.

So who are the Catholic bishops speaking for when they demand exemption from the law? Not their congregants, that's for sure.

These polls are inconvenient to the American right, religious and secular, so there will be an attempt to quickly bury them.

But the truth of this fracas is that the Pope is trying to run American politics and bring it in line with his own teachings. And like all theocrats, it doesn't matter what the people want, what matters is what he says God wants.

Liberal religious leaders start the fightback against the Catholic bishops

It's not about religious freedom

Religion vs the American Government

How the birth control fight could help Obama