The Catholic push for power is failing 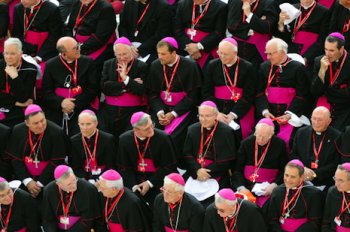 Yesterday the Catholic Church in America began a campaign it calls "A Fortnight for Freedom" which it says is an effort to raise awareness among Catholics of the threats to their religious liberty. In particular they want to "raise awareness" about the Obama administration's Health and Human Services mandate, which requires the provision of contraception as part of workplace health insurance packages.

The Catholic Church does not want to provide this element of the package to their employees in the many hospitals and schools it runs. The Obama administration compromised by saying the church would not have to pay for this part of the insurance.

The bishops responded with a chorus of screeching so loud that you would have thought they were being burned at the stake.

Their beef now is that they are not permitted to "practise their religion freely". The Government is forcing them to act against their consciences and defy their doctrine. They claim this is unconstitutional, unethical, dictatorial and so on.

The Church wants contraception removed from the equation completely. It wants its own "freedom" protected while taking away the freedom of women to make a choice about their own fertility.

The arrogance of the bishops almost defies belief. They behave as though they are perfectly entitled to write their own doctrines into law and they will portray anybody who resists as a persecutor of religion. The propaganda push has reached such a pitch that it begins to look like a parody of itself. The language used is so extravagant, the complaints so transparently self-serving and the claims so patently false that in the end even Catholics turn away in disgust.

Poll after poll shows that the bishops are out on a limb with this. Even among Catholics, the vast majority don't support the bishops' hysterical resistance.

The final verdict on the Catholic Church's political agitation will come when the President either backs down and complies with their demands or stands firm in the face of such dishonest and manipulative tactics. So, in an effort to galvanise what it hopes is its power base, the Church is planning two weeks of rallies, marches, lectures and special publications.

The Vatican's great plan to reassert its authority in the Western world has so far delivered little in the way of results. That is because the only way it can make a sustainable case is by employing falsehoods and exaggeration.

Here are some commentators who don't consider there to be any threat to freedom of religion:

Civil law does not have to follow Catholic doctrine

Who is paying for the "Fortnight for Freedom"?

Vatican on the verge of implosion