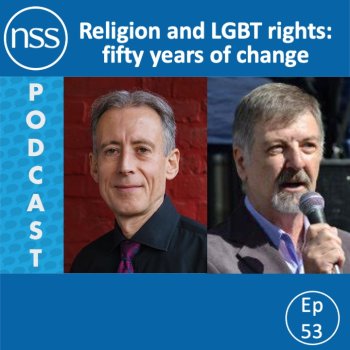 The history of LGBT rights in the UK has involved persistent struggles against prejudice, entrenched views – and organised religion.

In this episode, Emma Park speaks to two leading campaigners for LGBT equality and social acceptance in Britain. Her first guest, Peter Tatchell, has been campaigning on these issues since 1967. Since 2011, he has directed the Peter Tatchell Foundation, which campaigns for human rights around the world. His story has been told in the documentary Hating Peter Tatchell, released this year on Netflix. Emma's second guest, Terry Sanderson, started campaigning for gay rights in 1969. Terry joined the National Secular Society in the 1990s and was its president from 2006 to 2017.

The two speakers talk to Emma Park about their long experience of fighting for LGBT rights from the late 1960s to today. Each of them shares personal memories of what it was like to be gay in those years, and some of the highlights of their campaigning. They also describe the resistance they encountered from religious organisations every step of the way. Finally, Peter discusses the ways in which such organisations continue to oppose LGBT equality today, and Terry considers how far it is possible to be both gay and religious.

The history of LGBT rights in the UK has been a struggle against prejudice, entrenched views – and organised religion. In the podcast, @PeterTatchell and @TerrySanderson4 speak to @DrEmmaPark about their campaign experiences.
Click to tweet